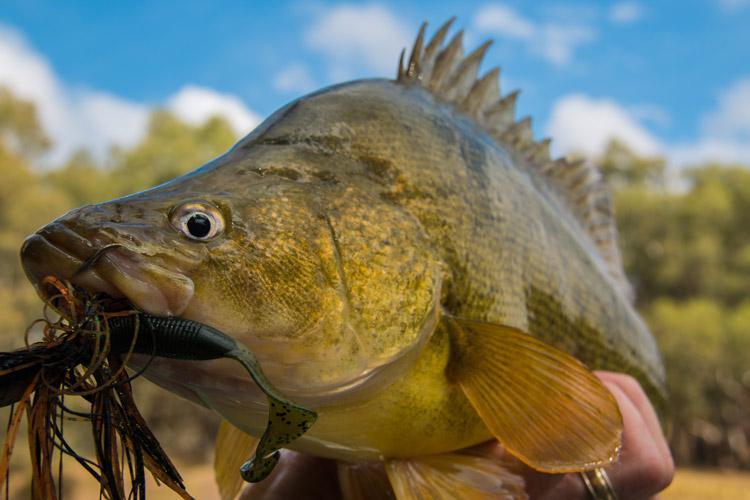 The Golden Perch or also known as the Yellowbelly (or Callop in South Australia) is a part of the perch family. They are a native Australian fish and they live alongside the Murray Cod. They are a slim, deep bodied fish and are sometimes said to be the same shape as a football. They have a small concave head with a small rounded mouth that protrudes when opened. Along the back of its dorsal fins it has thick sharp spikes and a single spike on the anal fin that can cause a nasty sting if not handled correctly. The Golden Perch can vary in colour depending on its environment. In dirty, milky coloured waterways they can be a pale, grey/blue like colour with a hint of gold or yellow and in clear waters they can have a deep golden/yellow/bronze like colour with even patches of black across their scales. Majority of the time they will have a yellow or gold coloured belly, this is where the common name of Yellowbelly comes from. 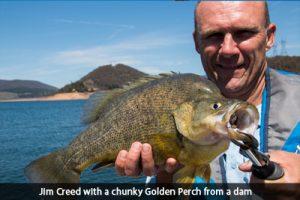 The Golden Perch is found in the same locations as the Murray Cod, throughout the Murray Darling Basin. From southern QLD, throughout NSW (excluding east of the Great Diving Range and the upper reaches of the Snowy Mountains) and down into Victoria. They are also found in the Lake Eyre catchment and are able to tolerate salinity levels just below that of sea water.

The natural habitat for the Golden Perch is slow flowing, turbid waterways, like the Murrumbidgee, Lachlan, Darling and Murray Rivers. They usually live in schools amongst the timber, weeds and reedy edges. Golden Perch will live on all manners of timber, although they take a liking to the younger sapling and willow trees, as these locations are home to shrimp and small fish. Due to stocking, Golden Perch flourish within impoundments and these fish have a different behaviour to those in rivers. They are a much smarter and more switched on fish due to the clear water. They will still hide in large schools, against some form of structure; standing trees, weed beds, grassy banks and rocky banks. Any location that provides cover, protection and a source of food. 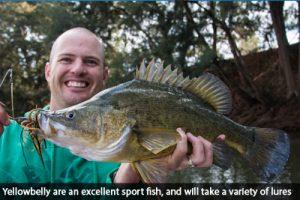 Golden Perch love to forage for food especially along weedy banks in impoundments. They love yabbies, shrimp, worms, insects and small fish. They will actively take lures that mimic small crustaceans and fish. In saying this they have been caught by anglers on lures aimed at Murray Cod which are too large for a Golden Perch to even swallow. This proves that they can be an aggressive fish and aren’t afraid of attacking something much bigger than their usual diet.

There is no closed season for Golden Perch and the legal size limit in NSW is 30cm, any fish under this size must be returned to the water. Please practise sustainable fishing to help protect the future survival of the species for generations to come.