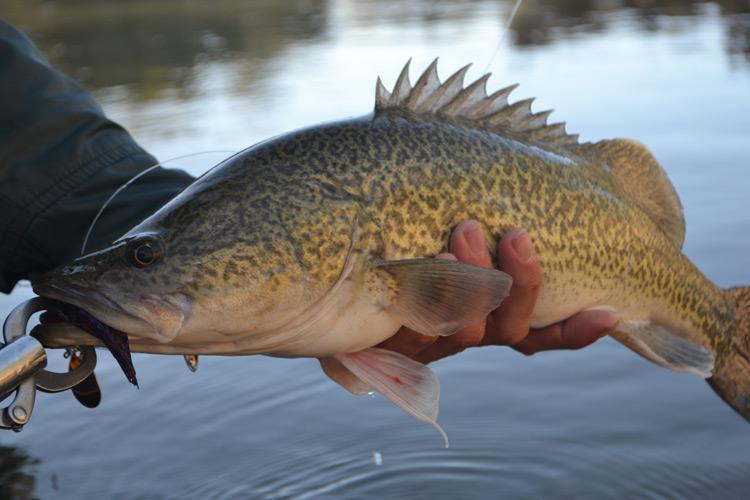 The Murray Cod is a large freshwater fish that is native to Australian waters. They are known as the king of the waterway and they are prized sport fish among anglers.

The Murray Cod is a large, long, deep bodied fish. They have a short rounded snout and a large mouth that when opened becomes a bucket that can inhale huge prey. They have a large rounded paddle tail that can produce extreme power off the mark, which allows them to hit their prey at speed. They have small eyes located on the top of their head which allows them to see upwards in the water column, making them a predator that attacks their prey from beneath.

The Murray Cod can vary in colour depending on its surrounding habitat. The most common colour is a mixture of light and dark greens in a mottled or marble pattern. This pattern is usually lighter in dirty milk coloured waterways and in crystal clear rivers and impoundment the fish has a dark green colour with a beautiful defined marble pattern. The belly colour of the can vary from white to a stone grey. The reason the fish takes on these colour variations is to camouflage in with the surroundings. This allows them to hide from other larger fish and also hide from their prey allowing them to ambush.

Murray Cod will also take on a different figure depending again on their location. Fish that live in rivers with current will be slimmer as they use more energy battling the current and trying to find food. The cod that inhabit impoundments will grow at a faster rate and will become fat and heavy, as they aren’t fighting any current and there is large amounts of food for them to gorge on.

The Murray Cod is a large predator that can grow to extreme sizes. In recent years there has been a few fish caught at the 150cm mark, which is extremely rare. Even fish above 120cm are a rarity, with impoundments and the Murray River being a stronghold for these monster fish. The largest officially recorded Murray Cod measured up at 183cm, 113kg (250lb) caught in the Murray River some many years ago. 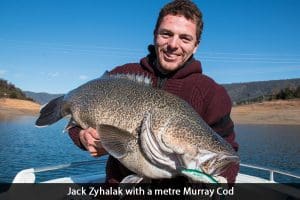 They are more commonly caught around 40-60cm and about 1-6kg. Since the first change in legal length from 50cm to 60cm (new legal length is 55-75cm) we have begun to see more fish around the 55-60cm mark. This is a great sign of a strong and healthy fishery. Fish above the 70-80cm mark are hard to come by among anglers as there are less fish at this size and they become more intelligent the bigger they grow.

The Murray Cod can be found throughout most of the Murray Darling Basin. Reaching as high as southern parts of Queensland, through most of NSW excluding east of the Great Diving Range and the Upper Snowy Mountains. The populations reach down into parts of Victoria including Lake Eildon.

Even though this may seem like a vast area of distribution, the Murray Cod use to flourish throughout these region and inhabited all waterways in vast numbers prior to European Settlement. Since this time the population has decreased significantly and the species are now seen as threatened, with only 10 percent of the pre European population still remaining.

In saying this the fish are making a comeback thanks to the help of fisheries with restocking programs and the aid of catch and release fisherman. 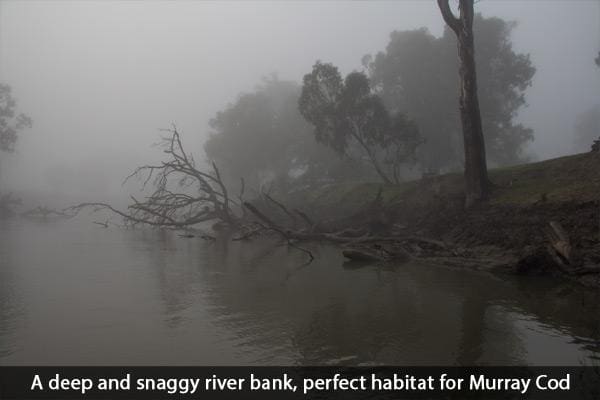 The Murray Cod inhabits both rivers and impoundments. It is a highly adaptable species that can survive in an array of different environments; from its preferred, large slow flowing waterways with deep holes, structure, dirty water and almost no current. To deep, clear and cold water impoundments, and up into the mountains in trout streams with fast running snow melt waters that moves over rapids and into pooled water where the cod hide out. Even though the Murray Cod will live in totally different waterways, they will still hide near similar features that are common in each location. They will find, own and live in the best location that the environment has to offer. This usually means, in the slowest water possible where there is some form of structure (usually large logs), in areas where they can ambush and hunt their prey. They will usually live on the same snag their entire life, especially as they mature and become among the larger fish within the area. Murray Cod can handle extreme temperatures and they will feed between 6-24⁰C. Any temperatures that are higher or lower will cause the fish to become very inactive. Optimum temperature is between 18-21⁰C. 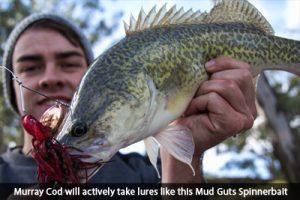 The diet of a Murray Cod can be simply summed up as anything that falls in front of them that they think they can eat. They do have a staple diet of; yabbies, shrimp, worms, bardi grubs, wood grubs, small fish and mussels. In saying that they will eat; Murray Crayfish, any large fish especially carp and redfin, ducks, mice, rats, moths, eggs, shags, birds, golf balls, snakes, rabbits and pretty much anything that is small enough to fit inside its mouth. Murray Cod will also take all kinds of lures, including; hard body lures, spinnerbaits and even surface lures which makes for some visually exciting fishing.

It is said that Murray Cod can live up to 100 years in age. It has been proven that they reach 50 years of age in a healthy environment. They reach sexual maturity around 5 years of age and between 2-3kgs. A fish of this size would be lucky to produce more than 8,000 eggs, which in the terms of fish fertility, is very little. A large female fish around the 50lb plus mark can produce up to 90,000 eggs which means that the large Murray Cod are vital for a healthy population. The larger fish also produce a stronger egg and with its added experience makes it a much more efficient breeder than younger fish.

It is said that Murray Cod need a spring flood for the eggs to be fertile and so that they can successfully breed. This has since been disproved and found to be false as Murray Cod have been able to breed in rivers without a spring flood and also in impoundments and farm dams. The female cod will develop and carry the eggs during winter, ready for spring. When the temperatures reach around 20⁰C the species will begin to lay their eggs, whether or not there is a flood. The Murray Cod will create a flat safe ‘nest’ for her eggs to be laid. Usually on a soft river bed, inside hollow logs or on patches of rock. The male then spend up to a week fertilising the eggs and then another week guarding until all the larvae have hatched.

The fish become very territorial during breeding season and disturbing the fish can result in them abandoning their nest. This is why there is a closure to targeting Murray Cod during this period to allow them to reproduce without any interruptions.

It has been recently proven that Murray Cod don’t reproduce in a number of dams. They still go through their breeding processes, the eggs are still laid, fertilised and they still hatch. But once the fish have hatched they don’t survive as there isn’t any microorganisms for them to feed on. Therefore they die and most of them become dinner for redfin. Therefore very little fish will survive in specific dams – usually the larger and clearer waterways.

As mentioned above there is a Murray Cod closure during their breeding season: from 1st September to 1st December (spring) it is illegal to target and keep Murray Cod (with the exception of Copeton Dam in northern NSW- which has now been opened all year round). Any fish accidently caught during this period must be returned to the water with the least harm possible. As of the opening of the Murray Cod season of 1st December 2014 there was an introduction of a new slot limit for Murray Cod; with a minimum of 55cm and there is now a maximum of 75cm (Victoria and NSW). This ensures the protection of the large fish to ensure more big breeders for the future.