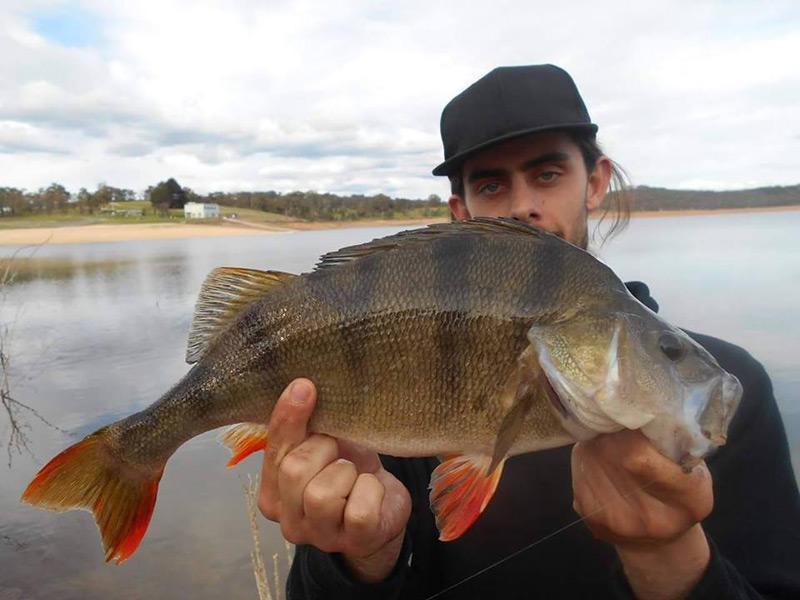 English Perch (also known as Redfin) belong to the Percidae (Perch) family. They are known by most as a pest that was introduced to Australia in the 1860’s era or to freshwater anglers, one of the best table fish on offer in our water ways.

An aggressive strike from these fish can stop the heart of its prey beating in an instant and being such an aggressive fish they will pretty much hit anything that moves in water. Schools of redfin use a similar method known as “beating”, where they flush out insects and small fish from weed beds or other shelter into open water, where they become easy prey for waiting fish. Methods like this give them a reputation as voracious predators and pest! Small bird’s, rats and small lizards to all lures hard, soft, long or short they will have a crack at, even some of the biggest cod lures. Redfin are known for having a go at eating something that is double its size and having no chance of getting it down.

Bait fishing for them is just as easy if you have a mixed bag of baits such as: worms, shrimp and small yabbies’ are just what a redfin have on their mind for dinner. All these offerings will temp a redfin small or large rigged on a running sinker rig, with a light size 1 or 2 ball sinker, a 15cm – 30cm leader and the correct size hook for whatever bait you are using.

The setup I like to use is a light, 2-4kg, graphite rod being any make or brand, whatever suits you best and feels good in your hand. Matched to a 1000-2500 size reel, again the same as a rod, whatever you are happy with using all day. Loaded with a light 2-6lb braid with 4lb being the ideal weight, as it makes for an intense fight on some of the larger fish. 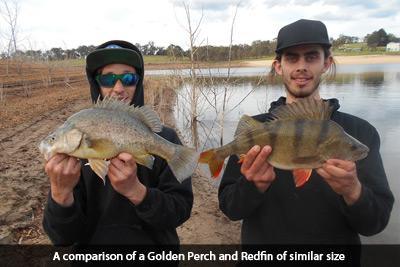 Searching for redfin is pretty easy to do as they are not a fussy fish when it comes to the water in which they live. They will inhabit anything from a small farm dams that are as dirty as mud, to a crystal clear lake such as Eildon – these are all good starting points to finding your first or PB redfin. Don’t ever think that a waterway doesn’t have fish because I have surprised myself and caught redfin next to storm water pipes and over flow areas. You may just get surprised at what you might find in such small puddle of water. Never overlook the water colour or size of the place you are fishing it only takes a small amount of water for them to take over and over populate that waterway. 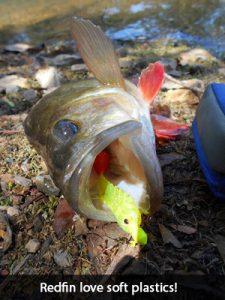 Soft plastics are an excellent lure for Redfin and are best worked very slow, with 1 or 2 winds of the reel to 3 or 4 small rod twitches, keeping the line tight till the lure is back in touch with the bottom. Then repeating that process all the way to the bank is one way of working a soft plastics for redfin. If you are noticing with this retrieve you are getting fish following the lure but not striking I like to switch it up to an even slower wind and less rod twitches giving the fish more chance of striking the lure.

When fishing with a small hardbody a continuous wind with the odd rod twitch here and there is the easiest way of working this style of lure for redfin. The same scenario applies as with the plastics, if you see that the fish are following the lure but not striking slow down the wind, putting a vicious twitch and pause in the retrieve, this can bring a fish undone.

Best time to target Redfin is in the reproduction time or breeding season when there are in very large schools following the spawning bait fish schools, feeding up just before they lay their eggs. Redfin spawn in mid-winter finding the cooler weather brings them out a little more and the start of spring. Submerged logs or other sheltered areas are most likely where you might find a school of spawning fish and are good areas to start searching for Redfin around this time of year.

The egg mass is unpalatable to most other fish and this protects them from predation, which is a reason as to why the small Redfin are in plague proportions in many waterways. English perch eggs develop and hatch in about a week, and the young fish school to help avoid predation. Redfin usually take 2-6 years to reach sexual maturity, but some have been found to be reproductively mature at 1 year of age. This is a reason to their huge numbers throughout many waterways.

I hope you all can use this to your advantage and bag yourself a hard hitting Redfin.

“Redfin are a ferocious fish that actively attack lures which gets my heart going no matter the size. I love to throw soft plastic up to 100mm for them as they are well known for hitting big lures made for other native fish. The first big run of a decent Redfin just after setting the hooks is what keeps me going for these great fighting and eating fish. Redfin can grow up to 50cm and over 2kg having a personal best at 49cm and just hitting 2kg, I’m not far off a trophy size fish. Reaching that magic 50 is my goal in fishing and I hope I can achieve this one day!”

Jim Bob James Murray better known as Jim Bob, grew up in the northern suburbs of Melbourne. With his home town not home to many waterways he has explored some hidden treasures to the north. Many waterways have surprised him with big catches from something as small as a puddle in a paddock! Jim Bob is an all-round angler who loves targeting all manner of species that pull line from a spool.
Related Posts