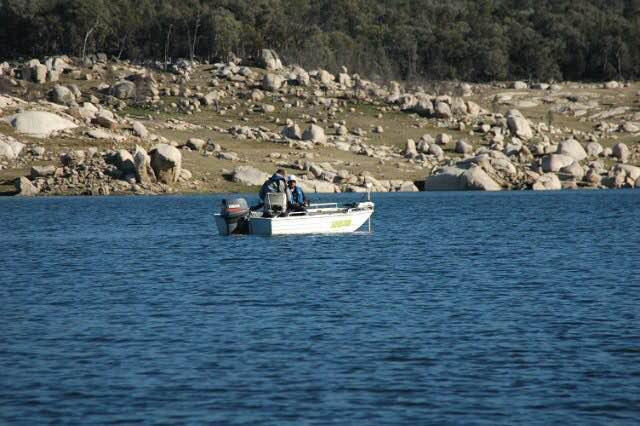 A recent trip to Copeton Waters, saw us rigging rods with new leader and picking our arsenal for the day ahead. We unloaded the tinny just before midday and set off up the Gwydir river arm of the dam. 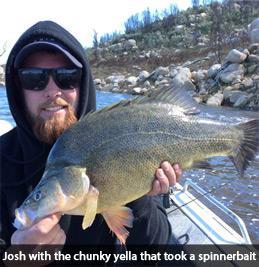 Keeping an eye on the sounder I found a nice drop off with some semi submerged timber. It wasn’t long before my fishing partner Josh felt the solid bump and shake of a golden as it smacked his 5/8oz Bassman ‘Codman’ spinnerbait (intended for the enormous resident Murray cod). A good start and we were on the board!

As the sun got to its peak the fishing had really shut down so it was back to camp to recharge our batteries and attack that afternoon/night. Back on the water I opted to fish a Jackall Doozer as we decided to fish the granite boulders and rock walls that make up the edge of the dam. Cast after cast was thrown, lures were hopped, slow rolled and twitched until I was slammed by a 56cm greenfish. After the usual photo session the little fella was released to grow and fight again for a future trip. Little happened that afternoon as the wind blew up and we were forced to call it a day.

Up early the next morning we thought we’d give trees a fish as we had an upcoming yellowbelly comp at this waterway so it was a good time to do a bit of pre fishing. Out came the spin rods loaded with 10lb brains and 12lb leader. I’ve found any combination of jighead and plastic will catch fish, if used correctly. In saying that my personal favourite is hands down the Bassman 1/4oz jigheads rigged with a Berkeley Gulp! 3inch grub in either black or watermelon.

We did some tree hopping while focusing on the sounder to find suspended fish and suspended fish we found!!! Down went the plastics and an immediate double hook up was the result with a 56cm and a 54cm model coming to the net. We continued on and managed another half dozen or so golden’s including one ‘monster’ that went about 22cm.

Here’s a few tips and places to start if you are heading to the dam for the first time:

Copeton has more structure then you could literally throw a stick at; with granite boulders ranging from pebbles to things that are 6m tall and wide, plenty of places for the fish to hide. There is also an abundance of standing timber that lines the banks which is perfect for vertical fishing for yellowbelly. The flats also hold good fish at the right time of year. 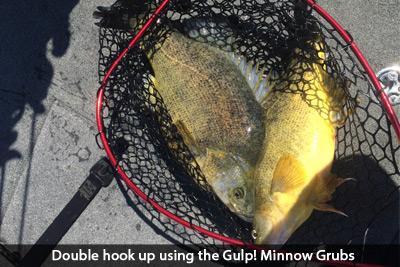 Murray cod can be caught year round however it seems to fish better in the cooler months. It’s not uncommon to see numerous metre plus fished caught in the one session when it’s really firing.

Yellowbelly seem to love the start of spring through to start of summer and can be caught on everything from blades, plastic vibes and some will even take a big spinnerbait if hungry enough. We fished in the start of October and it wasn’t quite warm enough for big scores of golden’s however we did land a few. There is also no closed season for Murray cod in Copeton.

Baitcasters in the 3-6kg range will handle most fish in the dam but if you want to troll big hardbodies a heavier stick would be a good option. Good quality reels matched with a good braid and leader is a must as these fish sure know how to get you in the structure. Spin gear is great for the Golden Perch and a good quality stick between 2-4kg, with a 2500 size reel, 10 -12lb braid and leader is ideal.

I personally am loving the Daiwa Generation Black range of rods as they have a great bottom end but still very sensitive in the tip and can cast for miles. Shimano Stradic ci4’s and Quantum Smoke reels are also my reel of choice.

Spinnerbaits are the most used lure for cod and here is no exception, why does everyone use them? Because they work! Anything from 1/2oz to 2oz will work and the best retrieve style is a simple slow roll.  Surface lures can work as well; Jackall Pompadours and Kingfisher Mantis are a few of my proven favourites. Trolling hardbody’s gets the fish going at Copeton as well and if you put the time in you will be rewarded.

The Copeton Waters Park itself is probably in my opinion is one of the better parks throughout NSW and can cater for all your needs. Multiple boat ramps, heaps of camping area, a waterpark, playground for the kids, fuel is also available, BBQ area’s and a complete canteen can sort you out if you don’t feel like cooking. There is also cabin style accommodation so if you’re looking to give a new dam a go, try Copeton Waters Park as you won’t be disappointed. As always tight lines!

Dave Faul Dave is a keen freshwater angler living in Central NSW. He loves fishing in the Australian tournaments where he has honed in his skills of lure fishing for natives. His home water is the iconic Lake Windamere where he spends his time catching some monster perch. He has been fishing for last 12 years of his life and has a lot of information to share.
Related Posts