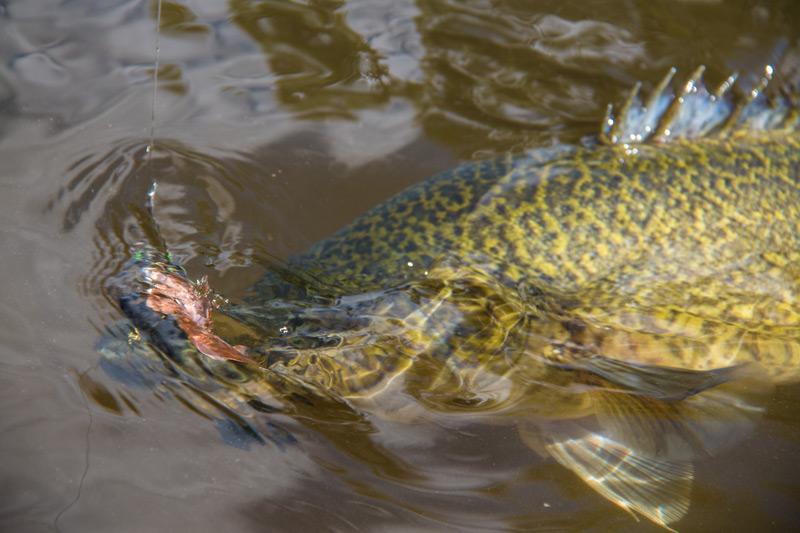 As anglers we can only assume how fish behave based on previous experiences. Majority of these experiences are accumulated from the position of our eyes – above the water. How the fish react below we can only guess, via the success of our implemented techniques. These understandings create invaluable knowledge, although there is only so much we can learn about our target from above the water. Majority of the waterways in which we target our native species are discoloured, dirty or a stained like colour, which restricts our vision into the unknown world. Even in the crystal clear waters the fish will be difficult to locate as they push deep, out of sight and wind is always around to disturb the water’s surface. If only we could break through into the unmapped realm and witness their behaviours. To see their reaction to a slow rolled spinnerbait or a soft plastic being twitched over a shaly embankment.

I was lucky enough to witness a glimpse of how our native species behave when undisturbed in their natural habitat. During this extraordinary day the lake didn’t produce many fish although it taught me many lessons that I will carry with me in future expeditions.

Perfect Start to the Day 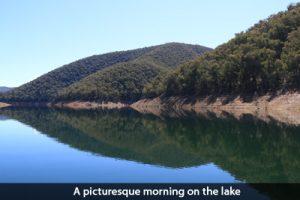 The boat touched water as it slid off the trailer signalling the start to the day. The glowing sunrise ignited the colours of nature as it penetrated the hilltops. Not a single breath of wind allowed for the liquid mass to be undisturbed, forming natures largest mirror. With a silence that makes you feel like you belong in this environment. A silence that should only be broken by the sound of a screaming spool! This picturesque scene across the dam right before our eyes, was the perfect start to the day.

Crystal Clear Bay that Reveals All

It was getting late in the Golden Perch Spring time run, mid to late November. We had already produced some great sessions on the yellas during the rising water temperatures earlier in the season. The water had now already peaked at the optimum 20⁰C and was now reaching the 23⁰C – 24⁰C mark. The week previous they were taking lures the best they had been all season and I was hoping for another great session.

The boat pulled down off the plain as we readied our weapons to work our first bay of the day. Just like a routine, we cast our lipless crankbaits in amongst the standing trees and rolled them back out. This technique, casting lures in against the standing timber in the bays was the most successful technique so far this season, therefore we continued the same way with confidence. While working the bay Grant Higginson, my fellow angler for the day mentioned the low visibility of the water in this bay. The water in this impoundment is usually crystal clear although some factors can cause certain banks or bays to discolour and lose water clarity. Usually areas near clay banks that are affected by the wind will discolour the water, or if there are schooling carp in the bay they will discolour the water due to their feeding patterns. This dirty water is a barrier between us and the world below and therefore we have no clue as to what was happening beneath. Our sounder allowed us to access a little of the information, as it showed us a school of fish. As to what species, we could only guess and how they were behaving, we had no idea.

After a solid hour working the timber in this bay and dropping our lures onto the school of fish without any luck a move was decided. As we ventured towards the bottom end of the dam the water began to gain more clarity. A well-known and successful bay so far this season was our next choice of attack. As we worked our way from the rocky point towards the heart of the bay we took note of the exceptional clarity of this water compared to the previous location. Along with the flat surface it unveiled the exceptional deep rocky bank over 5m below. Being able to see the area we were fishing, we could conclude that this bank wasn’t holding any perch. As we neared the back of this shallow bay we drifted over a massive submerged log, which was home to a mighty Murray Cod. As soon as we spotted this fish it had already seen us and was heading for deeper water. It was well over 130cm and one of the biggest free swimming cod I had ever seen. The clear water may have allowed us to see this fish and where it was living although it allowed him to see us as he disappeared. That’s the downfall of being able to pierce your vision into the depths, as the target can see us even better. We moved our way over the log and we neared the very shallow margins of the bay. Our vision patrolled the area in search for any sign of a fish.

I spotted a massive log that was laying in 1.5m of water at one end and in about half a metre at the other end. In this moment I witnessed one of the most incredible things I have seen in all my fishing experience. A monster Murray Cod that would easily be pushing 120cm in length came from around the back of the snag, exposing its back to the air before causally making its way down to the other end of the snag where it disappeared out of sight. I turned to Grant in disbelief of what we just witnessed. We were literally in the boat only about 4m away from this cod as it swam right in front of us. The boat was rested up against the bank right next to the snag as this monster came out from behind the snag again, patrolling the same path like clockwork. While he was out of sight for the second time I retrieved my GoPro from its case and set it up on the end of its pole. Right on cue he made his way around the snag again. It was incredible to think that he was free swimming in such shallow water, something I have never witnessed before.

We watched him complete one more rotation before he realised something was watching over him. Why was this cod behaving like this? It’s a question all anglers would love to know, but the truth is we will never know the exact answer – we just don’t know what the fish was thinking. We can make an educated guess as to its behaviour;

These are just all different queries to this situation. Which one is true? We will never know. At least we got to witness something incredible and it makes you think – what actually goes on down there? You take a step back and just open yourself to everything as you just never know when it comes to fishing. 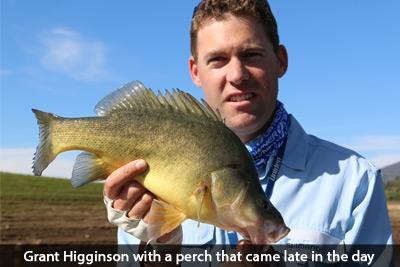 I moved the boat out into the middle of the bay where the water dropped to about 5m deep. I began casting around and while staring into the water, I could vaguely see shapes on the bottom of the dam. I cast my lure along the bottom for about 15mins trying to tempt what I thought were fish and the more and more I cast the more I thought they were fish. Maybe they were carp? I wanted to find the solution so I tied the GoPro to the end of my rod and sent it down. I left it bobbing around just below the bottom for about 4 minutes while I looked around at the hills and watched grant attempt to dive with the camera.

I had no idea what the camera was filming until the end of the day when I watched it back on my phone. I couldn’t believe what was down there! There were masses of Golden Perch, everywhere! Just casually swimming around on the bed of the dam not really caring about anything. My lure passed through the school that many times – although the fish weren’t interested one bit.

As you could see from the video the Golden Perch were everywhere and you think they would bite – not a chance. Just goes to show if they aren’t hungry – they aren’t hungry and that’s just the way it is. There may be hundreds of fish that see your lure during the day, it’s just about finding that hungry fish that is actually going to take you’re offering.

Over the course of the day we witness huge numbers of Golden Perch in the shallows. They had no care in the world for us or our lures. We even watched at least 7 perch slowly swim off from behind a rock ledge on the bank in less than a foot of water. They were all cuddled up in against the bank soaking up the sun, we dropped a lure on their nose but just like the rest of the day – it was rejected.

We did manage to land two solid Golden Perch very late in the day, but to know that our lures passed hundreds of fish – why did only two take the lure. It’s these questions that leave fisherman including myself pondering for hours. Is there a secret lure that will turn these fish on? Or are they that switched off that nothing will make them open their gobs. Who knows, but if we did we probably wouldn’t be as addicted to fishing as we are.

This day really opened by eyes to how fish behave and just how unpredictable they are. You never know where a fish may be or when it will attack. Many situations have surprised me as to what happened beneath the surface, but that’s what makes this sport so unpredictable!