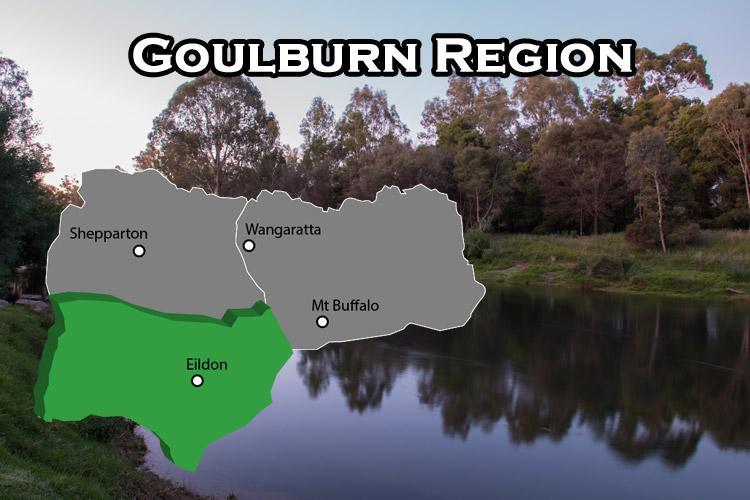 Locations covered in this report:

Eildon has still seen plenty of nice fish getting caught on larger lures this past week along with one angler scoring 2 monster fish one 97cm Murray Cod along with an 8.1lb brown trout  both on the same lure well done Matt Tormey!!

Murray cod have been the main catch with trolling still being the preferred method amongst anglers. Not many trout redfin or yellowbelly have been seen. CVLC super series was held on the lake and not a lot of fish were caught it was one of them days!!

Reports of Goldens on Jackalls and small spinnerbaits has been the only intel I have been told. Spoke to a local who said the yellas are all around the 40-45cm range but great fun on 10lb string!! Hoping in the next 2 weeks the water will gain some clarity and I will get out for a look myself to let you all know firsthand what’s going on.

The river has had a big flush with 30mm of rain in a short time pumping water from Thornton down. This will slow fishing right down for the next week until the water eases up and lets the fish come back out from tight cover. One you fella scored his first trout on a small spinner casting into the rapids, nothing huge but still a nice fish!

King parrot is looking a little sad with rain stirring up the low clean water it will be a little time now before the trout are happy and we can get stuck into them. Small Rapalas and Celtas will be the best chances and I guarantee there will be plenty of walking involved.

James Murray better known as Jim Bob, grew up in the northern suburbs of Melbourne. With his home town not home to many waterways he has explored some hidden treasures to the north. Many waterways have surprised him with big catches from something as small as a puddle in a paddock! Jim Bob is an all-round angler who loves targeting all manner of species that pull line from a spool.

Lake Eildon has seen a lot of traffic this past 2 weeks with the reports flooding in with nice size cod to 85cm being caught trolling and casting and the odd decent yella in the mix. Spinnerbaits cast up tight into the lay down logs has seen a few numbers get added to the tally although trolling is the preferred method amongst the anglers fishing the lake, 100mm lures and bigger is the choice for cod fishermen where the yella anglers have been running the smaller ones eg- size2 stumpjumpers and still picking up cod and yellowbelly. Attached are a couple pics of fish that were caught in the last fortnight on the troll around the lake.

Nagambie lakes has had a tone of dirty water get flushed down into the system and put the fishing right off. Had a couple friends fish the main lake with very little success on lures seeing only the one yellowbelly caught on a Ballista Vibe with the LED light. Cod up to 45-50cm on cheese and worms has really been the only fish we have heard of although the dedicated anglers who put the time in will reap the rewards.

The river is sitting at a nice level from Thornton to Trawool making it the best time to get onto the river and give a few wild trout a go. They are a little picky with what they are taking but if you persist with your lure changes you will find what sparks there attention.

Not a lot is going on with the creek as flow is really low and many anglers are stuck in COD mode at the moment so I’m thinking I will have to go for a look myself and let you all know what can be done.

Main arm of Eildon has seen a lot of traffic in the past week with reports of cod getting caught trolling around the trees and rock edges. Trolling big lures has been the key anything 100mm plus is what I would have tied on if I was on the lake! Yellowbelly have been very quiet with next to none being caught main catches at the moment at Lake Eildon is 40-50cm Murray Cod. Bait fishing has seen redfin and the odd trout get picked up on the banks from a few camps. I snuck a session in up the lake and we found a few fish ranging 50-60cm and bumping into a few very angry ones that headed for home very quick and spat the hooks both trolling and casting worked for us!

After this heat I have heard of some nice golden perch getting caught on spinnerbaits and vibes in the main lake. Casting has been the go although the trollers have found a few fish including some small Murray Cod. Hardbodys around 75mm work well as most of the fish in Nagambie will smash up a size 2 stumpjumper or whatever lure you choose around that size. Cod fishos have found it a little tough with the heat as the cod are tight against the logs and other structure so working that deep water is a must. Skott and I had a great session on the lake landing 4 yellas and 2 cod, Skott pulling off the unthinkable catching two fish in the fins in 2 casts would like to see that again.

The river is flowing pretty firm and has scared a lot of anglers off but those who are keen have reaped the rewards. I saw one angler land a mix bag of rainbows and browns with one rainbow up to 4lb. That’s a ripper for the river. Casting and wading the banks with spinners and tassies has seen more fish come to the bank although I wouldn’t put it past some minnow style soft lures to add some to the score board. I will be giving the river a fish in the next week or so to see what the fish are doing for myself.

Flow is still steady and running nice and clean I haven’t had a chance to get up to the KP and check it out myself but I heard the blackfish have been loving worms just on dark. Trout are a little tricky at the moment but if you get one you should be very happy.

Eildon is still on fire with great reports of nice size Murray Cod around the 40-60cm bracket mostly taking Stumpjumpers trolled around the 4-6m depth range. Golden perch have gone a little quiet with the odd one getting picked up from the rocky cliffs. The redfin are still a little quiet with not many report of them getting caught although I did see a guy break his PB with a nice 40’s model on a lure. Trout are still smelting around the points smashing the bait fish up onto the banks so throwing soft plastics towards the bank might find you hooking into some nice trout.

With cod season underway dedicated angler have taken off to Nagambie in search of their opening fish. Not a huge amount of fish getting caught but a few lucky anglers have been finding a few. I got out for my opening fish using surface lures around the edges of the main lake and scored a nice size Murray Cod that struck like lightning no more than 2ft from my rod tip. It took a Basko Dozer surface lure. If you’re throwing surface lures I recommend finding a shallow area and working it very hard putting more than 100 casts per area. Trolling has picked up the odd fish in deeper water along with some great hits that did not hook up, while casting spinnerbaits has shown it’s just as effective as trolling.

Have heard that the river is slowly holding one level for more than a week so fishing might be a little better than previous weeks. Trout will be hard against the trees and undercut banks, spinning with plastics and celtas will always be the best bet along with a pack of scrubbies for drifting. Further down the river towards Nagambie I have seen a couple golden perch taken on spinnerbaits cast at the trees.

The KP is slowly losing the high water level and leaving some great pools of water full of great fish. Best chance for some skinny water wild trout would be right now wading up the creek with small Rapalas and celtas, although don’t look past throwing some soft plastics as they work just as good if not better as you only have to drift it with the current as shown in the photos.

Eildon has been fishing pretty well the past few weeks with reports of nice size cod up to the 70cm range and also a nice bag of goldens in the mix. Trout are still a bit frisky and taking pink tassies on leadcores and downriggers, also small hardbodys trolled in deeper water have picked up the odd fish. Redfin have been very quiet with next to no reports of them getting caught but I’m sure there are some real small ones being caught off the bank on all sorts of baits. I’m expecting a lot of reports in the next months or so with cod season well underway now.

Lake Nagambie is still very quiet with little reports of fish getting caught in saying that there are the few anglers who have been finding the odd cod with a few goldens following up lures but not striking them. Like Eildon we will be expecting to see more cod reports in the following weeks.

The Goulburn River is slowing down a lot with warmer weather settling in, few rainbows have been caught in the Thornton area on scrubworms and small spinners. Also some nice browns to 60cm in the pondage just above the river. Downstream of Trawool will see more reports of cod and yellowbelly with the warmer weather firing up the natives in the lower parts of the river.

The KP has been flowing very nice the past few weeks with little rain fall leaving the water to clear up and the fish to be a little trickier to find and catch. Drifted worms would be the preferred method as it will be the most natural looking bait. Lures are still worth throwing but I would stick to smaller Rapala’s like the CD5 and even some of Basko lures cudgee jnr 45mm hardbody.

Jim Bob James Murray better known as Jim Bob, grew up in the northern suburbs of Melbourne. With his home town not home to many waterways he has explored some hidden treasures to the north. Many waterways have surprised him with big catches from something as small as a puddle in a paddock! Jim Bob is an all-round angler who loves targeting all manner of species that pull line from a spool.
Related Posts