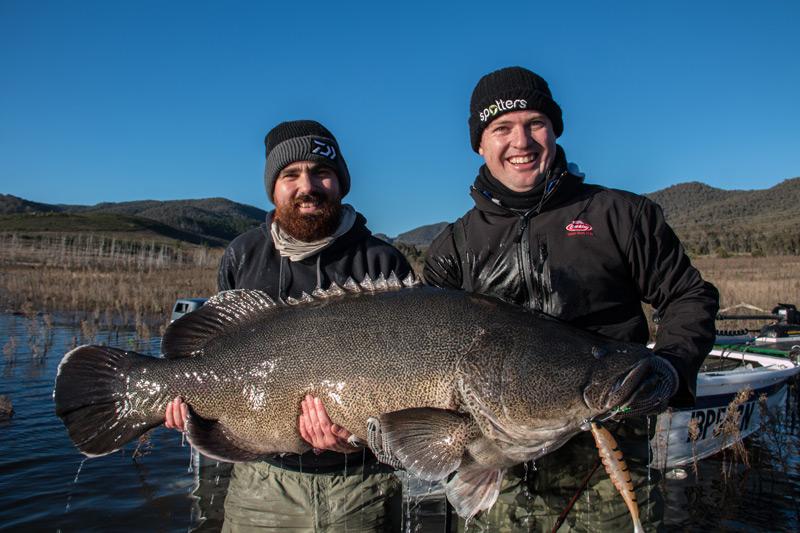 The long weekend was nearing us and the grand plan was to cast for fast water river Murray Cod. Well like I said that was the plan…… Divine intervention had other plans; the sky’s opened up and turned my beloved river into chocolate milk.

Time for Plan ‘B’

So we scoured the maps and river systems for our plan B location. Unfortunately all were either in flood or filthy dirty except one, the dam which most people refer to as Lake Disappointment (Blowering Dam). This was far from my ideal location although this dam is known for its truly monstrous fish it’s also known for its gin clear water and is massive abundance of food. Not only are the fish huge and well fed but they can see you coming from a mile off! They are the most intelligent and spooky cod around. But what other option did we have but to head to Blowering and try chasing a big winter Cod.

As we tied our leaders and launched our boats the game plan was to cast big soft plastics at shallow grassy banks for feeding Murray Cod. Last year and this year I had heard a few reports of Murray Cod chasing Trout that were being landed boat side so with that in mind I targeted the location that Trout would frequent in hopes to find an ambushing Cod.

It didn’t take long to find a very shallow grassy bank with plenty of trout rising and feeding on the wind lanes close to the bank. With my 8 inch R.I.P shad rigged I hurled the oversize plastic into the shallow grassy bank and proceeded to slow roll it back like a cruising Trout foraging for food.

We were sitting in 3 metres of water and casting into less than 1 metre when I loaded my heavy spin outfit up and sent my plastic like a missile about 30 metres ahead of me.  I clicked my bail arm over and gave my plastic a sharp hop to clear it off the grass and started my slow retrieve, the plastic had covered about 2 metres of water when all hell broke loose and the rod buckled violently under the weight of a very big fish.

The Moment that Counts

The first thing I remember seeing was the massive boil as the fish powered off with my plastic instantly making me feel insecure. Even with the very heavy gear this fish was dictating terms in this fight. After a short run in an odd manoeuvre the fish came up and broke the surface slowly head out first like a breaching whale, it then turned and bolted in the opposite direction.

Later we found out the water I hooked the fish in was only 70cm deep, hence the free Willy head out of the water act as turning in such shallow water would have been difficult for the big fish.

The big fish started to head out to deep water and it was at this time the only thing I could think about was I had a stupidly large amount of line out between me and a big angry Cod. The fish was deciding on where he was going as much as I tried to muscle him back to me and to make things worse the landing net looked like it was made for scooping pond fish!

I called my mate Creedy over from the other boat as this was going to be at least a 2 man job to lip the fish as I set to work on tiring the fish out. There was no way I was going win a tug of war with this Cod so I took my time and worked on turning the beasts head in the opposite direction as to try and tire it enough to land. After a solid fight the fish surfaced and was only hanging by the assist stinger hook. After some delicate rod work the fish surface and was gripped firmly by Creedy and Samuel.

With the fish secure under the boys firm grasp, we motored with the fish in the water to the bank for some pics. With all three of us in the water so to limit the time out of the water we took a few quick snaps to freeze the moment for a life time and beyond! Such a great feeling landed brute that measured in at 125cm, which is by far my best catch! The big girl was released back to where she belongs and with a huge tail beat was once again off to the depths to terrorise the local trout population. This fish had not only given me but all four of us an experience we will never forget and best of all she is back in the water to live on! Maybe to be caught by another lucky angler when it’s even bigger!

There is no words to express the feeling you get when crossing paths with such a beautiful giant and one I will not soon forget, even better was to share it with close friends.

With that in mind I would like to thank; Sam, Creedy and Jack for all playing their part in helping me catch and release this amazing fish and I hope I’m there when you guys hook up to the next one.

Good luck and Fish On!