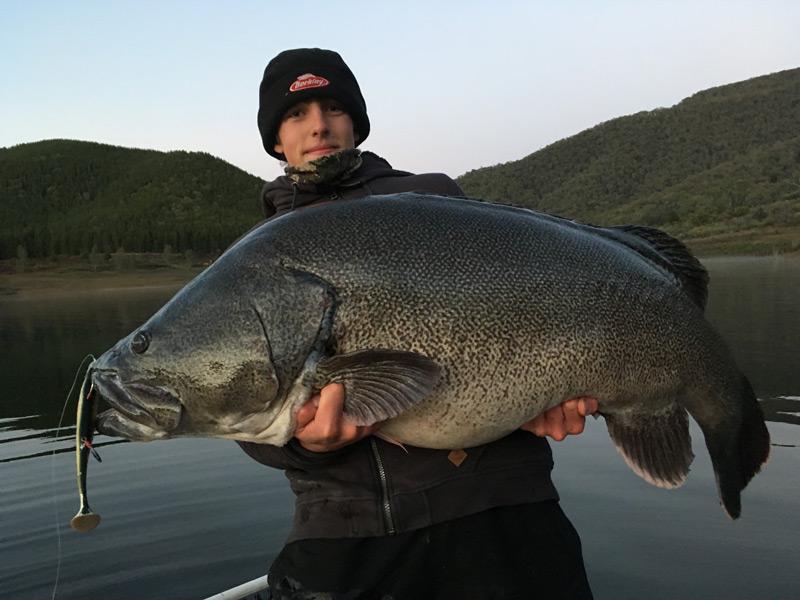 As anglers we are always finding new techniques, new locations and setting new goals for ourselves. My goal of catching a metre Murray Cod on the cast has been a life long dream but after seeing social media go crazy with big Murray Cod on soft plastics, I knew this might be my time to turn a dream into a reality.

After all week at school thinking of what the weekend might hold and the time finally came to start getting ready. That week I bought 2 soft plastics from Chris at Tackle World, the big 8” R.I.P shads. Lots of people had been catching big Murray Cod on these over the last month. I packed lots of lures but Dad and myself both had these soft plastics tied on first. Saturday afternoon we decided on a plan to fish a little in the dark and on sunrise in shallow water. Then as the sun came up start working the deeper water where the cod would be heading after a big night feeding. Off to bed early Saturday night, I’d set the alarm for 4:00am and I was more excited then had ever been for a fishing trip.

Unlike a school morning I was straight out of bed super keen for the morning fish. Leaving from Gundagai we were heading for a big Murray Cod dam named Blowering.  An hour drive and we were on the water by 5:30am. We began with casting the soft plastics as planned. Trying a few shallow grassy bays with no luck first light started to glow in the distance. It was a perfect morning, Dad and I both got the feeling something was about to happen soon.

It was nearly time to move on, as we worked our way over the last likely looking bay but I fired one last cast into very shallow water knowing with full confidence my soft plastic was in the right area. I engaged the reel and before I even had time to start winding a big weight pulled my rod towards the water.

I knew straight away this was a beast of a fish. It was not an aggressive strike but the big heavy tugs told me it was over that magic metre mark. The fish attacked my soft plastic in such shallow water, I could see him rolling around on the bottom with all of his fins breaking the surface. I managed to quickly pull the beast out of the danger zone and into some deeper water. When dad and I got a better look at this fish we could not believe the size. We were both shaking, especially when the fish took some huge runs pulling line from my reel with speed.

After an intense 3 minute fight it was time to try land the fish. With such a small net the only way was to use our hands to pull the beast onto the boat. When this incredible fish slid over my lap there was no words to describe the feeling. This has been my dream for years and I had finally made the dream come true. All of the hours of casting come down to this one moment that I had dreamt of for so long. At 122cm and my new PB I could not believe the size but also how amazing these fish look. It was my privilege to snap some photos with the beast and then release it back into the dam where now someone else can experience what I did.

Without a doubt a fish of a lifetime and at only 15 years of age I cannot wait to experience more fish like this one.

I would like to thank dad for helping me land the fish and the team at Social Fishing for the tips to help me land this Blowering Dam monster. The best part is there are still many more of these fish out there and with 3 weekends left in cod season, right now is the best time to be on the water to land that metery all anglers dream of. Murray cod fishing is hard but if you want that once in a lifetime fish set yourself that goal, put in the hard work and you will reap the rewards, just like I have!

Tallis Cotterill Tallis is the youngest and newest member of the Social Fishing team. He grew up fishing and loves the challenge it brings. Tallis spends his time targeting all freshwater species in a number of different locations. Casting lures for Murrumbidgee cod and targeting monster cod in the dams are his favourite styles of fishing. Tallis enjoys sharing stories and articles to help other anglers learn more about freshwater fishing.
Related Posts