﻿
Home Blog News Why was the Winter Cod Season so good this year? 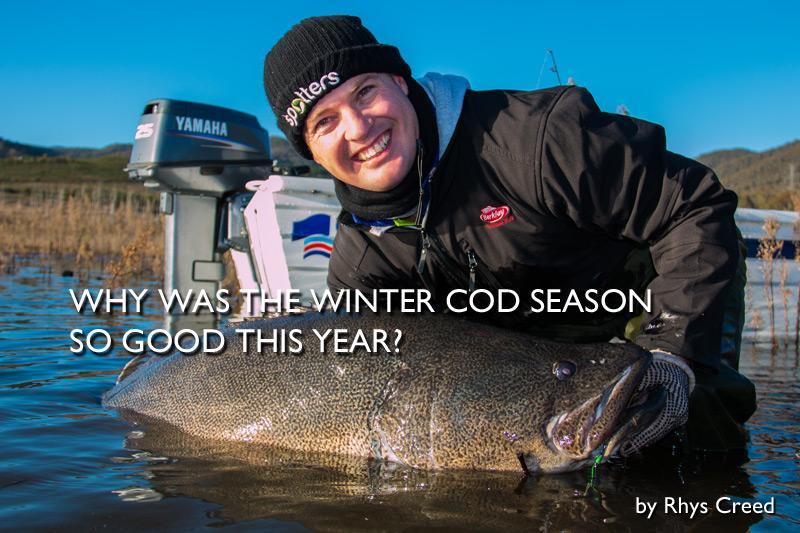 Usually winter is tough fishing and not too many people venture out onto the water – but this year was different. Many of the impoundments like Copeton, Eildon, Blowering and Burrinjuck received more winter boat traffic than ever before.

If you were one of the keen anglers who fished hard for big cod you will know why – because this season was incredible! There were huge amounts of big cod caught during the day with most being caught on the cast. The one lure that seemed to be the stand out this winter was the soft plastic. It feels like this lure went from being the least used cod lure to now the most wanted.

So why was this season so good?

What was different to previous years?

There were definitely more anglers and boats on the water this year which will always mean more fish. But if they weren’t feeding these boats wouldn’t have been there – so there must be a reason as to why they were so active – and I have the answer for you.

Like always, fish react due to the weather and in this case it’s no different. The one environmental factor that was different this year was – the high amount of rainfall we received.

This year many locations across the country received huge amounts of rainfall and this was exactly the case in the catchments of the above mentioned impoundments. Some locations recorded their wettest winter on record and the proof is the near full dams. We have received nonstop rainfall and this is why the fishing has be top notch.

You may be wondering how more rainfall helped and there are a few reasons – so let’s find out.

With the masses of water running down the catchments the lakes and dams have filled up rapidly. Dams like Blowering were sitting in the low 20% range at the end of summer and now it’s at 77% and still rising. I wouldn’t be surprised if it reaches the 90% mark this year.

The rise in water level turns the fish on, they become active as they hunt the newly flooded grounds. Rising water will dislodge food like frogs, bugs and small mammals and these shallow locations are also a perfect ambush ground for hiding baitfish. It makes for an easy way to feed without expelling too much energy. And this is why the big fish have been caught up in the shallows – because they are actively looking for food which means your lure becomes more attractive to the fish. In comparison to a fish that is hiding out in the deep water, resting on its snag.

“No matter what style of fishing you are doing always remember to target the feeding fish. Target the areas where the hungry fish will be.”

The big cod will push up onto new snags and in the process will feed. When the water begins to fall, the fish will then have to retreat and they shut down. So either a rising or a steady lake will always fish better than one that is dropping.

With all this rainfall comes clouds and an increase in overcast days. These gloomy looking days are perfect for nearly all styles of freshwater fishing.

Why? What the cloud cover does is it blocks out light from the sun which then creates a darker day. Less light enters the water which means the cods confidence rises. The more confident the fish is the more likely they will be in a feeding mood. The fish is able to swim around under more stealth than it would be able to if rays of sunlight were beating down through the water column.

That’s why the best time to be fishing is first and last light – because that’s when the fish hunt as they cannot be seen by their prey. So if you look at the big picture, a cloudy day is almost like getting to fish first light, but it last all day!

These above two reasons are contributing factors for the active Murray Cod but the third really gets the cod ticking! This is a significant reason as to why the fishing has been so exceptional. It’s because of all the rainfall, that we had a……..

You may have noticed that we haven’t had many frosts at all this winter. This will vary depending on where you are living but with all this rain brings less frosts and warmer days. They are still miserable and cold but while it’s raining the nights stay warm due to the cloud cover. Clear skies have eluded us for most of winter which has kept all the warm air in the atmosphere.

What this means is the water temperature hasn’t dropped as low as previous years and the fish are remaining more active than usual. At this time last year I remember getting into 7 degree water to cuddle a Murray Cod and at the same time this year the water is sitting around 10 degrees. That’s a significant difference and I’m yet to see the temperature drop into single digits.

This not only makes the fish more comfortable but it means there are more baitfish on the move, which gives them more of a reason to look for a feed.

All these contributing factors have an influence on the super cod season. They are more active because of the rising water and food source, the clouds and the warmer water – but it is all related back to the increase rainfall. Even though the rain is miserable and can dampen your spirits, it has played a vital role in helping this winter season to be a memorable one!