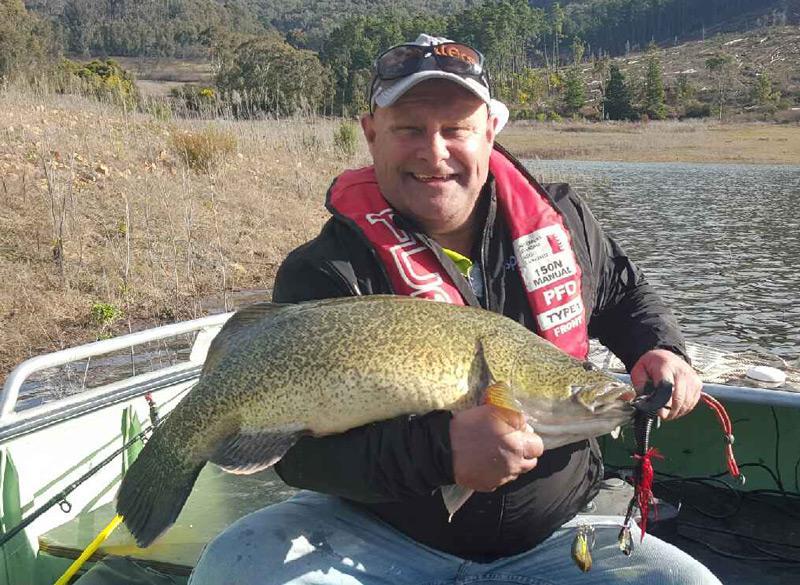 Not being able to get out for a fish since we did the 3 day drift with the IFISH crew back in May was starting to get on my nerves. I was keen to get up to Blowering Dam before the Cod season closed and finally the opportunity came around.

Before heading up to the dam I needed to stock up on the ever so faithful Mud Guts Spinnerbaits. Dave had only just created a new lure ready for release and he said it was going to be deadly. I’m not sure who had the biggest smile, me or him, but to say I was excited was an understatement.

With his back to me and hands working overtime grabbing jig heads, crimping pliers, big plastics, stinger hooks, big Colorado blades and associated bits he finally turned around with a smile from ear to ear and introduced to me the first ever ‘Big Quaddy’. Even better it was in my favourite colour, red and black. This thing had big cod written all over it.

The plan was to head up with the family; Michelle, Harley, Rachel and I couldn’t get away until Saturday morning. We were on the road at about 7.00am to drive up to Blowering Dam and we met up with Jack Zyhalak who was just coming in for the day. Although he said it was quiet he did say he got smashed using a Big Guts spinnerbait but lost a big fish that near totalled his spinnerbait.

Not the Best Start

As we said goodbye to Jack, Harley had turned around to drive off and went over a wet area only to be bogged and not moving anywhere in the Nissan Patrol. We hooked up the winch and tried to pull him out only to find it was making the situation worse. We decided to undo the boat trailer and connect the snatch strap and after a couple of attempts he popped out of the mud and onto dry ground. Then it was a matter of dragging the boat out and we were on the road again.

We got to our camp site and set up the boat to begin fishing. We were blessed with a beautiful clear sunny day and the water was like glass. We headed to a bay that Rhys Creed had told me to check out along with a few other spots.

I tied on my new Big Quaddy Mud Guts spinnerbait and began casting. This lure was built for big fish in shallow waters. Due to its large blades it has a really slow hang time which keeps it in the strike zone for a long period of time. This thing looked great coming back to the boat with the big Colorado blades working their magic and the huge tail following behind. It was just a matter of time and it was going to get crunched.

After fishing for a couple of hours and working different bays and rocky drop offs without a hit we went back to camp to have some lunch. After our quick break we went back out onto the water to try some more areas and while cruising along in 6m of water I cast to the bank and let the spinnerbait sink to the bottom.

I started the slow retrieve back and within 8 cranks of the handle my rod buckled over and I had a big cod on! Taking it slowly and trying to keep calm I got him to the top and couldn’t believe its girth, this thing was fat! Harley came over to me in his boat and grabbed the net to help me get it into the boat. With a few photos and a quick measurement that went 76cm, (unfortunately not a new PB but it’s certainly the fattest) we put it back into the water. Holding the lip grips while letting him get ready to be released. Once I thought he was right I opened the grips only for him to turn and with a big flip of his tail covering us in water. Watching them swim away I think is just as exciting as pulling them in the boat.

A Trip of Many Firsts

We fished for the rest of the day until dark unfortunately no other fish wanted to play the game. But still excited about the one I did catch as it has a lot of firsts for me.

All in all it was a great trip