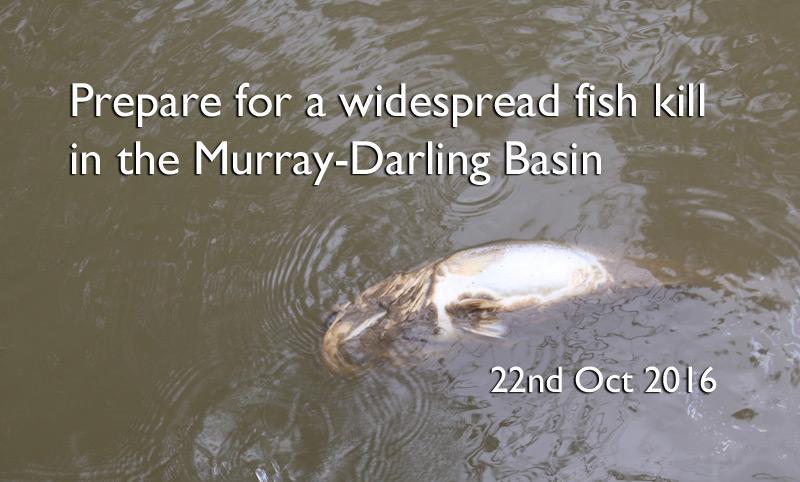 Prepare for a widespread fish kill in the Murray-Darling Basin Prepare for a widespread fish kill in the Murray-Darling Basin

Unfortunately we have an update on the suspected ‘blackwater’ event in the mid-Murray, lower Murrumbidgee Rivers and throughout the Edward-Wakool systems.

Sadly, we’re getting reports of dead fish sighted in the Edward River in Deniliquin, along with Murray crayfish crawling onto river banks looking for oxygen; and to escape organic matter coming in from floodplains that some locals believe, haven’t been inundated like this for up to 40 years.

Yesterday the Murray-Darling Basin Authority issued a press release describing the blackwater event as a natural occurrence, triggered by high rainfall and flood waters during spring.

“The high level of carbon and low levels of oxygen in the water due to the load of decaying organic matter is not unexpected,” said David Dreverman, MDBA’s head of River Management.

Speaking on the ABC’s NSW Country Hour yesterday, DPI’s Regional Manager for the Murray Darling region, Cameron Lay, agreed the widespread flooding is a natural event and a consequence of the time difference between floods. However, data received from the field and higher temperatures expected in coming weeks predictably heightens the risk of fish kills across the southern basin.

“This is an extensive event, with the Bureau releasing some figures yesterday saying it was the wettest five-month period in NSW on record,” he said.

Mr Lay said that reports of fish kills to date have been reasonably isolated but urged all river users to be looking for signs of distressed fish.

“Our fishers in particular who are out on the water are a critical part of this process, they really are the eyes and ears for us.”

To monitor the situation, state agencies and environmental water holders are working together to identify opportunities on how to provide and create local refuges, with increasing oxygen levels for our native fish.

According to the MDBA, the high carbon loads and floods over the flood plain could extend downstream while similar blackwater responses could be occurring in tributaries such as the Goulburn and Murrumbidgee valleys.

We’ll keep you updated on the situation as it comes to hand.

Members of the public are asked to notify their local Fisheries Office or contact the Fishers Watch phoneline on 1800 043 536 if they witness any dead or dying fish in their area. Tips for Targeting Cod on the Closing Weekend