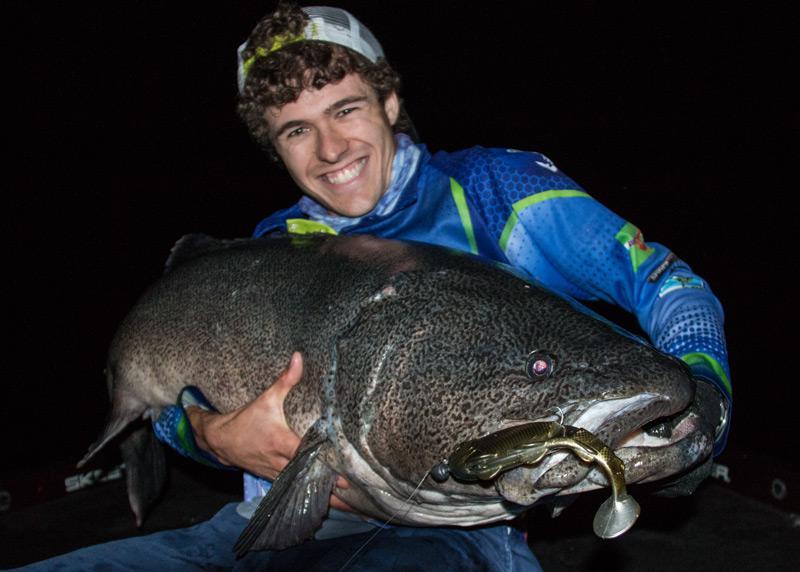 Over winter and the past couple of weeks we have spent a huge number of hours on the water searching for big fish. During the middle of winter we dropped 13 big fish in a row and the luck just wasn’t on our side. There were a few bust offs and a couple of smaller hits but there was something in common with majority of our missed hits.

Upon inspection of the plastics after a hit we were finding that the battle marks the fish were leaving behind were located on the head of the lure. Mainly the teeth marks were showing up on the jighead. This means that the fish were attacking the lures head on which is a natural way in which Murray Cod will feed. They do this because their target has less chance of escaping.

As the season opened 3 weeks ago we continued to cast and the hits were there but they kept managing to slip our hooks. Brad Triffitt spent a huge amount of time on the water of late and has dropped over 19 very big fish in his boat. It was becoming extremely frustrating and something needed to change…… fast!

So we came up with a few ideas as to how we could stick the fish that attacked the lure head on. It was and still is a very difficult thing to achieve as the hooks need to be facing the opposite way for them to stick, BUT the problem is we are striking the wrong way for those reversed hooks.

In the end we came up with an idea that we thought may work, well it had to be better than nothing. I created a setup that is similar to that of a kingfish jig with an assist hook on the tow point of the plastic. We couldn’t have the hook free swinging so we pushed it inside the plastic just enough to sit in place and not fall out from repetitive casting.

After some more trial and error by Brad he worked out the hook needed to be on the underside of the plastic. Now I want to mention this hook is a treble in which I’ve used bolt cutters to take one bend off. So this hook has two points sticking out ready to pin a fish.

The night it all fell into place

The night came where we gave it another crack, both Brad and I were rigged up with the new design. This monster cod hit the lure on the drop and once hooked my adrenaline was pumping. I well and truly under called the size of this fish as it rose to the surface and thrashed around… a very unhappy fish. I kept the fish on the surface and led it into the net! The success was incredible and the fish was a monster! And it means even more to get it on the cast!

We lifted the fish onto the deck and it played up in the net and while in the process the FX Fury plastic fell out. While getting the fish ready for a photo, Brad spotted the orange braid and hook imbedded in the jaw of the fish! That was the front hook setup!!!

And that’s the moment I realised it had been hooked on the stinger we designed only a few night prior! It worked! The feeling was so good, to finally stick one of the head on hitting cod! And what a monster the big girl was! (The braid that connected the front hook to the lure broke when the fish went wild in the net).

It’s amazing how much time and effort we put into these cod and it’s so important to get every tiny detail right. It can come down to something as simple as sharpening your hooks, checking your leader or putting the hooks in the right spot!

You can watch the tutorial video on how to rig plastic with the front hook here:  Tutorial Video – Rigging Big Soft Plastics for Murray Cod