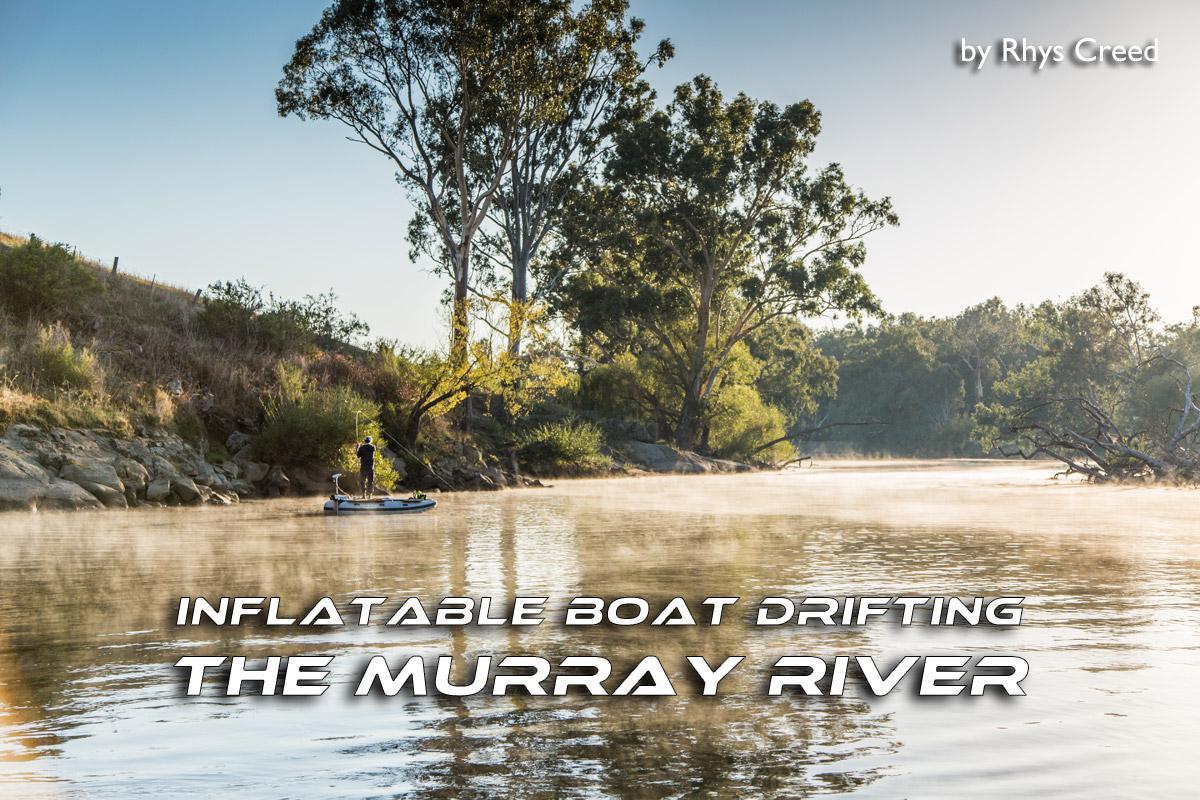 April is the best month of the year to be fishing our beautiful rivers! They are usually low flowing and clear, the days are perfect with cool morning and warm sunny days. We spent the last few weekends on the water floating down in inflatable boats and tinnies in search of Murray Cod.

The best part about this style of fishing is the adventure, the obstacles you come across and there is always something exciting that happens (battling the rapids is all a part of the fun).

Everything went wrong on the trip but somehow we still managed to experience some great fishing. We arrived at our launch spot which was extremely steep so we had to drop Grants 3.7m tinny onto the ground and then drag it into the water. Once we had the tinny and the inflatable in the water we were ready for the day.

Only 10 minutes into the trip, before we had even cast a line, Kyle fell into the water, totally covered, freezing water and no spare clothes. Poor bloke must have been cold….. But to us it was just too hard not to laugh!

We also got stuck on a stone bar and luckily there were three tops blokes to help us carry the boats over a stone bar. After all these obstacles we were finally on the water!

The scenery was amazing and so was the fishing! Grant landed the first small cod followed by all of us getting onto a few 50cm Murray Cod by mid-morning. They were all taken on spinnerbaits, with both darks and lighter colours working, at this stage nothing was the stand out.

Then we were met by more problems, Grants electric motor died and I had to tow him around all day with my inflatable boat. By the end of the day I was surprised how well the little rubber boat performed as a tug boat.

The Change to a Soft Plastic

With the water running so clear I decided to tie on a soft plastic rigged weedless. The Berkley Powerbait Rib shad rigged on a 6/0 Owner weedless wide gap hook was the choice. These plastics are soft and have a wide side to side tail action which the native fish love!

It didn’t take long before the plastic had its first victim. I was working a willow lined bank when I spotted an extremely old and crusty mid river snag that was cracked and had big openings. I dropped the plastic just upstream of the log but it wasn’t quite far enough as the plastic just bumped over the top of the log. The current pushed the plastic downstream and as I retrieved it back to the boat (which was about 4m away from the snag) out of the corner of my eye I spotted a cod that raced out of the log at lightning speed. It headed straight for the plastic which was now at my feet and it inhaled my offering!

I’ve seen a lot of amazing stuff out on the water but that’s up there with one of the best. I’ve never seen a cod come out of a log and chase a lure at such speed! This fish was fat and went 67cm in length, very healthy conditioned fish.

Soft Plastic Fact:
When rigged weedless soft plastics are just as snag proof as spinnerbaits and hardbody’s. The hook isn’t exposed and the plastic can run over all sorts of timber. When it does get stuck it’s usually just the front of the lure that gets caught up against the structure, a short flick of the rod tip will help to dislodge the plastic.

We had a great afternoon with more fish being caught on both dark coloured spinnerbaits and also soft plastics.

The afternoon was getting on as the sun started to fall and the fishing was starting to pick up. We were still searching for that larger fish to top off our day. We came to a small pile of pushed up structure under a willow when I lost control of my boat. While attempting to straighten the boat I paused the retrieve of my plastic. This allowed it to free fall before being inhaled. This was by far the largest fish of the day as it loaded up my rod and started doing circles below the boat. I managed to steer the fish clear of danger while trying to avoid overhanging willow that were threatening to push me out of my inflatable.

I stopped the fish quickly and Kyle slipped it into the net. It was FAT and we were all guessing around the 80cm mark. We pulled up on the closest stone bars to take some photos for the memory book. The fish was a tank and stretched the tape to 77cm.

The day concluded with plenty more fish that rounded out a brilliant day on the water. Even though we had a few technical difficulties it didn’t damped our spirits. We designed a system that allowed us to still fish and it worked wonders!

We were back to the same stretch of river to give it another crack! This time I was joined in my boat by Stuart and Grant was back in his tinny. The river was even lower, which meant more exposed snags and better fishing conditions.

It didn’t take long before Stu had the first fish on the board. It was a dark and great coloured fish that hit the lure twice in the one retrieve. Stu wasn’t sure if he had a hit but he gave the lure a small flick and continued the retrieve and the fish came back!

The next few hours were slow but I did come very close to a good quality fish. The sun had just pierced over the top of the hills and was lighting up the snags beneath the water. From a distance the approaching willow didn’t look like anything special, although when we neared I spotted a few big logs laying along the bottom of the river about 2m beneath us.

I dropped my Weedless Powerbait Rib Shad down to the snag. The plastic never disappeared from my view and within a few cranks of the handle I watched a big Murray Cod appear right behind the lure. He was intrigued by the plastic and I instantly paused and gave the plastic a twitch. The cod stayed behind the lure and I twitch the plastic again and this time the big girl turned quickly and I thought I was on! It looked like he grabbed the lure and turned by unfortunately he ignored the plastic and I wasn’t able to get him interested again. We estimated the fish at around 90cm and he was well and truly a big river fish that would have taken a lot of stopping.

After this early bit of excitement it was looking promising but the river didn’t produce. The morning was very slow with only a couple of small fish making the total 4 fish by midday. It was a much tougher start to the day compared to the week earlier. Why? We had no idea. The weather was warmer and the water was lower, it really should have been fishing better but it was a lot of casting for little reward.

I was casting the soft plastic all day but for some reason it didn’t get the results like the week before. Stu managed to pick up a few small fish as the afternoon moved on and I was still fishless, and so was Grant.

It was now 3pm in the afternoon and between 4 of us we only had 5 fish, but something changed! I’m still unsure as to what happened but the fish flipped a switch, they went off! Cod started coming from everywhere and everyone was starting to catch them. They were all on the small side but it was great fun! We landed a total of 22 fish for the day with 17 of them coming in the last 3 hours (3-6pm). It is to date the best native bite I have ever experienced.

At one stage I thought I was going to go fishless with my first fish coming at 4:30pm. I fished with plastics all day and decided to make a change to a dark coloured Mud Guts Spinnerbait late in the day and after two casts, whack I was on!

Just goes to show that natives behaviour different every day and you just don’t know what the stand out lure will be. Always have options and when you start the day choose a different lure to your mate. You need to find out what they are taking on the day.

The structure that accounted for the most fish in the afternoon were the rocky banks. They are packed with small fish that hide tight up against the cracks and holes. Once that sun dips behind the hills the fish sit on these banks in ambush waiting for food to flow past. The best way to fish rocky banks was to hold the boat in mid river and slowly drift with the current casting diagonally downstream. The way your lure is able to flutter down to the strike zone while you are drifting towards it. It also payed to cast right in against the rocks on the bank as some fish were sitting within a foot of the bank.

The highlight of the trip:

It was getting late and the sun was dropping. It was about 5:30pm and the fishing was incredible! We neared a big outside rocky bank which was coming through the section of water we were fishing. We knew the fish were on so we tried to get in as many casts as we could, the more casts the more fish. I was rolling my lure back in deep as Stu let a cast fly. The spinnerbait had only just landed against the bank before it was smacked. Stu was on so I went to start ripping in my lure before it was smashed and my rod loaded up! Yep that’s right we were both on, a double hook up on Murray Cod!

This is so rare and uncommon but whenever you have two cod on at the same time, you know the fishing must be good!

0
9   0
previous Monster 130cm Murray Cod on Surface: The Story
next Rise & Fall: The Effect of Impoundment Levels on Native Fish