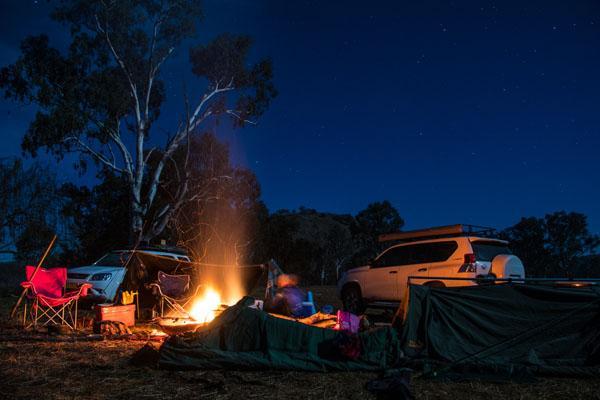 Nothing beats packing the car full of gear and hitting the road in search of new water, an adventure and good times! The June long weekend is a great time to do this especially when it comes to the camping. It’s cool enough to light a fire and sit around sharing fishing stories (sometimes they aren’t always truthful).

Our trip was set for the 2017 June long weekend with the plan of floating a new section of river. We knew the fishing would be tough but a couple of fish each would be great with anything extra a bonus.

Setting up the Camp

Tallis and I arrived at our camp spot on the Saturday afternoon, just with enough time to set up and go for a last light walk with the fly in hand. Our chosen river was full of both Brown and Rainbow Trout as well as a few natives. We camped right in front of a perfect deep run, and with the river running low it was perfect for the fly.

After mucking around with some tangles (this happens to every angler) Tallis managed to land his first cast mid-stream. The current was slow, but still quick enough to move the fly. Tallis walked alongside the fly slowly as it drifted so that it floated naturally with the current and it went under. A quick reaction and the hook was set into a solid and hard fighting fish which quickly revealed itself as it launched from the water. It was a Rainbow Trout and an acrobatic one at that!

After a prolonged fight with plenty of runs Tallis landed a beautiful plump Rainbow to start the trip. We continued to work till dark with a few more hits and a dropped fish on the soft plastic T Tail Berkley minnow.

Our plan for the Sunday was to drift 13.5km of river in two of the Takacat 300 Sport inflatable boats. These boats are unbelievably stable and perfect for fishing in shallow water. Far better than using a kayak, canoe or small tinny. We met up with our other team, Chris and my brother Dylan. We loaded my car full of all his gear, left his car at the pull out point and drove on up to a launch location.

After setting the gear up on a pebbly beach we pushed off and were on our way down a section of river we had never fished before. The river was only skinny, shallow and full of rapids and fallen trees. We had no idea what was ahead but could only hope that we would make it to the other end safe and before night fall.

The quick water and current in the river was difficult to manoeuvre through and Chris managed to bump into a few sticks early on which had Tallis a little scared. We fished our way downstream knowing it was going to be a tough trip on the natives with less than 8 degree water but the Trout were there as a backup.

It didn’t take long to find some amazing water that just screamed fish! We worked it thoroughly with my confidence lure, the Mud Guts spinnerbait. I went with a purple and white, Dylan had a purple and red and they both had small willow blades.

The reason we used willow blades is because the water was clear and moving quickly. So we had to get our lures down as fast as we possibly could. That’s why we use a willow blade! It catches much less water than a Colorado blade (Colorado blades are the round spoon shaped blades) and this allows the lure to fall quicker in the water column.

I was working a steep rocky bank with a set of fallen logs and I let one of my casts sink as deep as possible and halfway back to the boat it was nailed! As soon as I lifted I saw a solid native thrashing its head side to side trying to throw the hook. It succeeded in its endeavours and I was left in awe that I had just lost what looked to be a solid native. I was positive it was a Golden Perch and if it was it was close to 60cm, it looked to be a monster. But Dylan thought it looked like a cod, so not sure and unfortunately I’ll never know.

A few snags later on the sunny side of the river Dylan’s spinnerbait was followed by a reasonable fish as it turned at the last minute back for its snag. It looked very much like a carp to me but Dylan was adamant that it was a Golden and on the next cast he proved me wrong! A solid hit right beside the boat and a healthy Golden Perch was landed to start the morning. It was a great start considering the temperature of the water and that we were fishing new water.

Someone always has all the Luck

After that action we thought it was going to continue but the bite slowed right down for a few hours. We passed great structure but couldn’t produce a result.

Lunch time came and we pulled up just before a rapid and Tallis, Chris and Dyl all jumped out to have a cast while I was left making lunch (and you can guess who made dinner as well). It only took Dylan three casts and a feisty little rainbow grabbed hold of the T Tail soft plastic. He was two fish up and everyone else was still sitting fishless.

After catching this Trout Dylan continued to cast the soft plastic downstream ahead of the boat. He allowed it to sink and then slow rolled it back to the boat. While doing so in a deep hole he loaded up again and this fish took off managing to strip a fair bit of line from the spool. It fought hard giving away that it was another rainbow, which ended up being slightly larger than the one he caught the hour earlier.

Dylan was on a role carving all of us up! What makes it worse is that he hasn’t fished in about 12 months but every time he does, he catches fish! He just seems to have the ‘stink’ when he comes fishing.

Mid-afternoon saw Chris land a solid 38cm Rainbow on a soft plastic and this one was going back to camp to be cooked a very special way, which I’ll talk about later.

The day was running out and I had cast the same spinnerbait all day. Everyone else had a solid crack at the Trout but I stuck with the natives and on one retrieve behind a standing stump a solid Golden poked its head up as lunch was passing by. The solid head shakes were a great feeling at the end of the day and Dylan safely netted the fish of the day.

This Golden Perch was fat, really thick through the shoulders and in great condition. It took the same lure I used all the day which was the purple and white Mud Guts spinnerbait with a small willow blade. A great lure that you should definitely have on hand. As always some smileys (photos) and the fish was released back into the river.

We pulled up to camp after collecting the cars to enjoy a warm fire and the moon coming up over the valley. At the end of a trip nothing beats sitting back, relaxing and enjoying the warmth of the fire. Not to forget the friendly banter about the day and which boat landed the most fish!

Chris couldn’t help himself but go down to the water’s edge to have a cast with a small hard body lure. It didn’t take long before he hooked up right on last light and after a really good fight the fish came to the bank side and I netted a solid Rainbow Trout.

Tallis caught this fish on dark the arvo before using a Czech nymph and Chris caught it again the next evening on lure. This is the perfect example of catch and release and how our fisheries can survive when we handle fish correctly and release them. You can have the enjoyment of catching a great fish and if it goes back, someone else can come along and get the enjoyment out of catching that same fish you released. This is ever so more important along public access reserves and if there are more fish in our waterways then there are more fish for our younger generations to catch and help get them into this great sport we all love!

As I mentioned earlier Chris kept one of the fish that we caught to take back to camp. Trout are a beautiful eating fish and being introduced and stocked in our rivers and lakes they are there for anglers to enough. Nothing beats catching your own fish and then cooking it by the camp fire only a few hours later.

This cooking style was a little unorthodox and different to most but it was something I wanted to share with you. It’s simple and easy to do right by the river or at home.

Ceviche is where you ‘cook’ the fish in lemon juice.

You don’t heat the fish, you leave it in the lemon juice and the acid cooks the fish. It’s still very raw but has a brilliant flavour to it.

All you have to do is cut the trout into thin slices and soak in a little bit of lemon juice for 20mins or so. Chris added a dash of soy to this Trout which added a little extra flavour. It was beautiful and fresh! Perfect for people who enjoy smoked salmon with a very similar texture. It’s not for everyone but definitely worth a try for those who like to new and raw flavours.

The rest of the night included the normal camping routine before Tallis and I wondered off to take some photos in the full lit moon. It made for the perfect setting allowing us to capture some shots of the surrounds. I’ll wrap up this story with some photos from the night which I hope you enjoy!

0
0   0
previous The 102 from Nowhere!
next Giant Dreams – Tallis Cotterill Doubles up on Metre Murray Cod