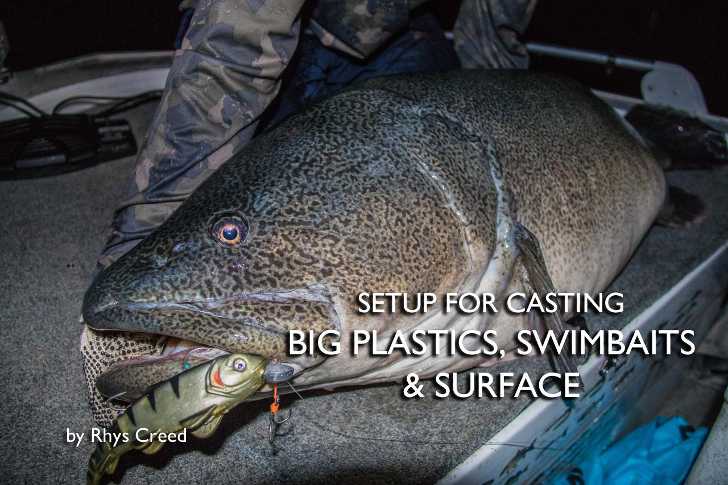 Fishing Clear Water - Successful Tip for the Middle of the Day

If you spoke to a Murray Cod angler back five years ago about their gear of choice the answer would have gone a little like this:

“Heavy rod no longer than 6ft and 6-8kg, 30lb braid, 40lb leader, hardbody lures up to 150mm and spinnerbaits”. Ask the same question to the same angler now and the answer would be a whole lot ‘bigger’!

The gear we are using is getting stronger, longer and heavier as we are targeting bigger and bigger cod. The size of the fish in our impoundments is unbelievable and the rivers aren’t that far behind with some monster Murray Cod in the Murray, Murrumbidgee, Lachlan, Edward and many of the northern NSW rivers.

These fish are extremely powerful when they hit their prey, which means we need well equipped gear to stop them from reaching the structure. This is one reason for the beefed up gear but the main reason is for the size of the lures we are casting! Fishing in the large dams and lakes is where we have seen the appearance of massive soft plastics, swim baits and surface lures. These lures are well over 200mm in length and can weigh in excess of 100 grams, this is why we need to upsize our gear.

The new rods that have hit the market in recent years are known as swimbait rods and are anywhere from 7ft to 9ft in length. Yep that’s right 9ft, and I bet your thinking that’s as long as a surf rod and it almost is! The most common length is around 7ft 9in up to just over 8ft, as they are still easy enough to handle in a boat and you can still feel your lure working through the water. The longer the rod the further you can cast but they do become a bit bulky in the boat and reduce your sense of feel.

These rods load up really well with big lures and have the ability to cast them a long way. This is vital when it comes to casting plastics across shallow banks and also surface lures in low light periods.

Different brands have a range of different weight ratings but most come in 20-50lb. If you’re looking to buy one find one in between these ratings.

The downside of using these rods is they aren’t as accurate when casting tight to structure. There main benefit is casting long distances. Perfect for fishing the;

If you push in closer to a bank and want to cast lures tight in against a fallen log, make sure you have your old setup in the boat.

The brand that I’ve been testing lately is the Abu Garcia Veritas 2.0 swim bait rod that is 7ft 9in in length and rated at 25-50lb. This rod holds a ton of strength, without losing the sensitivity of a quality graphite rod and it handles large lures with ease. I’ve managed to land a few big fish using this rod and its performance is brilliant, plenty of power and strength through the blank.

The above goes for all the other quality swimbait rods on the market, like the:

With an increase in rod length and lure size for targeting big fish we need to follow suit with our line. The braid we use for majority of our Murray Cod and Golden Perch fishing, especially in our rivers is 30lb in breaking strain. Over the last few years I’ve started to upgrade to 40lb to give us a little more security when hooking into big fish. On the swimbait rods when casting big lures we like to use 50lb-60lb braid as casting lures off becomes a big problem.

As we are using extreme force to throw these heavy lure, they can easily snap off if the reel happens to bird nest. This happens to even the best of anglers! A slight little loop in the line can easily stop the reel from casting smoothly and that will cause the line to catch, once that happens the lure is usually gone (unless it’s a surface lure because it will float, luckily). By having 50lb-60lb it not only helps reduce lure loss but also helps land some of the monster fish we are targeting.

We also want to increase leader size up to 50-60lb, but this is mainly for the fish rather than the casting. We need the strength in the leader to hold these massive cod especially if they rub on structure during the fight. These cod are so large that many of them swallow the entire lure and shut their jaw on the leader. This can cause problems during the fight as it doesn’t take big cod long to rub through a leader with their razor sharp needle teeth. That’s one reason it’s good to try and land the fish as quick as possible, the other reason it’s better for the fish to have more energy for release.

I have been using a tough 50lb fluorocarbon during the dark and in low light periods. The only time that this rule doesn’t count is when the fishing is tough in clear waters during the middle of the day. Cod are very hard to catch during the day once the sun is up high and some of them can spook to a heavy leader. I will downsize to 40lb during the day and sometimes I even use as little as 30lb just to try and get that hit. It is a risk because you have to be careful with such a light leader but sometimes it is worth it so I always have a spool of 30lb and 40lb in the boat as well.

Last of all I wanted to touch on the lures that we use to target the monster cod:

These are by far my favourite because they catch fish! Soft plastics are extremely life like, they look like a fish because they can be moulded into any shape imaginable and the colour and patterns that can now be printed on them look exactly like a fish.

The other great feature of the soft plastic is the ability to be customised with different hooks, jigheads, weights and also stinger hook configurations. You can add different size hooks and customise lures for shallow or deep water and also weedless for casting hard against structure.

The FX Fury from Traps Tackle is my go to plastic by a long way! They are the perfect size, extremely life like look with fins, colours and realistic eyes. Another feature they have above other plastics is their durability with super tough plastic. These lures can handle hit after hit from monster cod and won’t tear or fall apart.

The swim bait is simply a hard version on a soft plastic, extremely realistic and usually consists of multiple jointed section. Every season there are new swimbaits hitting the Australian market for Murray Cod anglers. They have a very unique side to side snaking action which makes them irresistible for Murray Cod.

The down side of swim baits is they are usually restricted to the one depth range (some brands come with clips to attach weights) and they are pricey. A cheap swimbait sits around $40 with many pushing the $60 mark.

You can’t head out in search of Murray Cod without oversized surface lures! Catching an impoundment Murray Cod on surface is one of the most exciting forms of angling for these monster fish.

We use both paddlers and wakebaits in excess of 150mm with some lures up around 280mm. Large Murray Cod prefer to use their energy to eat something big and if they are going to swim all the way to the surface it needs to be worth it!

For the past few years I have been casting the 175mm Gobsmacked Leviathan with huge success! This lure is the perfect size to temp the monster fish without being ridiculously heavy and bulky.

It has a brilliant wide to side snaking action with the double joints while the front of the lure bloops along the surface. It comes all finished with razor sharp hooks which means you can tie the lure on and start fishing.

The above mentioned lures are all big, heavy and awkward to cast and that’s why you need to upgrade your gear to suit. If you’re keen on targeting big Murray Cod with these oversized lures, then a swimbait rod is a must!