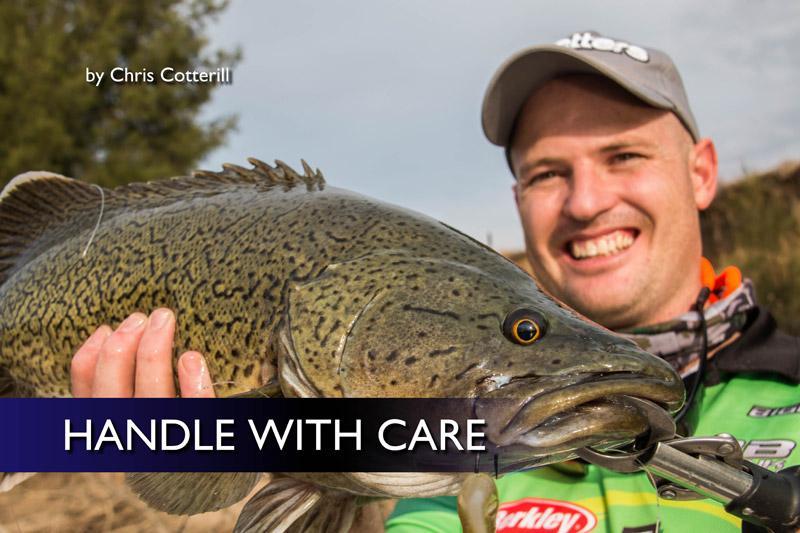 The question is often raised in regards to the rules and regulation when it comes to handling fish in particular Trout Cod or other protected species like Murray Cod that are under or over the slot limit. As they are classed as a species in NSW that must be released immediately.

The one issue that has been raised from all of this is from us anglers who just want to record the moment by taking a simple picture of our catch.

Up until recently it has been a very grey area. Even for myself I was unsure of the rules and regulations when it came to handling big cod or species like Trout Cod. There had been rumours that if a large cod was taken out of the water for a picture and you were caught doing so, that an instant fine would occur and the same or worse was to be said for doing the same with a Trout Cod.

‘So after a LOT of digging I finally have an answer for us fishos, well at least in NSW.’

This is an exert straight from NSW DPI and I didn’t want to take the risk of writing this myself as if I managed to stuff this up and got a whole heap of anglers fined, I’m pretty sure I would be lynched.

So here we go!

“NSW DPI recognises that a fish may need to be landed on a boat or shore to determine whether a fish is of a particular length or species or to remove hooks to ensure least possible harm.”

“The issue of photographing fish outside bag, size or other legal limits has arisen in respect of Murray cod in excess of 75cm and for other species and circumstances. NSW DPI has issued the following policy advice which provides clarification to fishers within the context of Sections 36 and 220ZF of the Act in relation to photographing fish which are not permitted to be taken (including Murray cod over the maximum size limit of 75cm).

If a fisher captures a prohibited size fish, or a fish taken in excess of the bag or possession limit, or seasonal closure or a fish that is otherwise not legally permissible to take under the Act, photographs may be taken at the immediate location where the fish is landed provided a device to photograph the fish is immediately available. DPI catch and release (best practice) guidelines are adhered to as much as possible and the fish is returned to its natural environment with the least possible injury as quickly as possible after photographs have been taken (see www.dpi.nsw.gov.au/fisheries/recreational/info/catch-and-release for guidelines).

Weighing of fish in these circumstances or transporting fish to be weighed/measured is not considered best practice and is not permitted for fish which are not permitted to be taken.

Note: If the fisher does not adhere to the above requirements, compliance action may be taken and the policy does not apply to fishing in closed waters.”

So basically if you do catch a prohibited fish such as a Trout Cod or a Murray Cod you are permitted to take a picture as long as you adhere to the safe handling guidelines above.

But also remembering that even if you think you are adhering to the guidelines and a fisheries officer thinks that you are risking the health of the fish by your actions to get that happy snap you still maybe issued with an infringement notice.

The best way to keep in the good books of the NSW DPI (who do a magnificent job and who are highly understaffed for the job they do) are by following these tips:

And when taking a picture (especially for those who go a little snap happy on the poor old fish or new to the angling game) a great rule of thumb when you lift your catch out of the water for a snap is to take a deep breath and smile while taking your picture. If you need to take a breath during the pic so does your catch.

If we follow the guidelines laid out for us and try to reduce the stress on the fish and minimise the risk of fish dying then we should have this fishery for a long time.

But if there are fish fatalities due to poor fish handling, we may be locked out or banned from targeting the great species we love.

With that good luck and fish on!