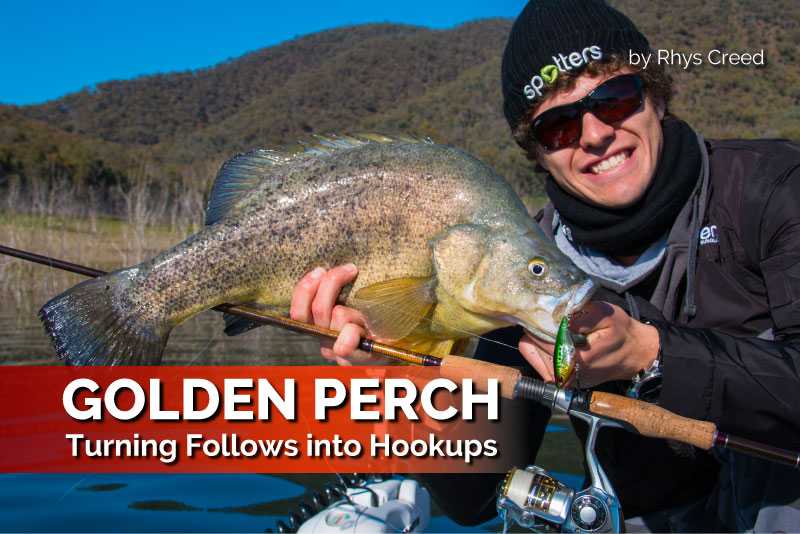 Due to most impoundments being so clear, the Yellowbelly can usually be seen cruising which increases the frustration tenfold when they totally ignore your lure, even worse when they decide to follow it right to your feet before turning back to the depths… without your lure in mouth.

In saying that, it does make for one of the most visual forms of freshwater fishing in the country, when they decide to take your lure right in front of your eyes. It’s why we spend countless hours in search of Golden Perch in dams, because the reward is worth it.

As previously mentioned it is frustrating watching perch after perch follow your lure, while almost sniffing at the back trebles, before turning away. This can happen countless times during a day on the water and as they turn away you ask yourself; ‘What did I do wrong?’ It’s this pondering question which I feel we will never know the entire answer to; although after many experiences we have grasped a fair understanding on how to make them attack.

The most Important Step – Spotting Fish

The biggest key in turning follows into hook-ups is watching your lure right to your feet. It’ll be in the last few moments of the retrieve when you spot the fish and can implement different techniques to trigger a bite.

There are two main techniques you can use and this first one proves to be most successful:

When retrieving your lure as soon as you spot a fish – stop your retrieve and just pause the lure! It’s as simple as that! Keep the lure still and most of the time if the fish are active they will open up their mouth and inhale your lure. It’s amazing how effective the slow retrieves are on Golden Perch, the slower you do everything the better the results.

This technique is what I will use majority of the time especially throughout early to mid spring when the fish are just starting to feed up after winter. They will be a bit slow and shy at this time of year, so subtlety and finesse are key.

If the fish happens to become disinterested in your paused lure and starts to swim away this is where you implement the second technique.

This technique is probably one you have tried before in many fishing situations. When the fish follows and you twitch the lure or swing your rod tip side to side to make the lure swim that little bit more… such tense moments when there is a fish sitting right on your rod tip!

Back to the scenario above: if the fish begins to swim away give the rod tip a short sharp lift. This will make the lure bounce up slightly and to the fish your lure will look injured. This will create interest in the fish again and it will usually come back to your lure.

Once the fish is back behind the lure if it hasn’t eaten it by now give it another short and soft lift.

‘It’s important to only give the lure a short twitch – if your flick is too large and erratic it will spook the fish’.

Continue this technique and just hope that the fussy yella will take the offering. This technique works well when the fish are in an active and aggressive mood.

If you find on the day that they are taking a liking to a twitched lure over one that is paused, then use this second technique first. It’s all about figuring out how the fish are behaving and using the technique to suit.

What to do if the fish keeps swimming away?

Now go back to the scenario again: you’ve tried the twitching technique and the fish is still swimming away. If you twitch the lure to make it look injured and the fish doesn’t come back then free spool your lure and let it sink back down. If you’re lucky the fish will find it as its fluttering back to the bottom and smack it on the fall.

Usually what will happen is as you begin your retrieve the fish will follow it again. This is where you need to give it a pause before it comes into view, in hope that the Golden Perch is right behind your offering. If you pause the lure deeper down in the water column the fish will have more confidence and that means a higher chance in it attacking your lure.

Don’t Give up and be Patient

If the fish is hungry; majority of the time it will take the lure on the first pause. The longer the fish follows, sits and waits the less chance you have of enticing a bite. In saying that don’t give up as I’ve caught a fish that hung around my lure for over 10 second!

Now this might not seem long but when you can see a bulky golden right behind your lure it feels like an eternity. In this situation the fish followed the lure and sat behind it once I paused. It turned away and was heading back to its snag before I twitched the lure and it shot back over.

It almost looked like opening its gob but instead it stopped and eyeballed the lure. As it was sitting right behind my lure I didn’t want to spook it by twitching the lure so I just hung the lure in anticipation. The fish just sat there for like I said, an easy 10 seconds before changing its mind and inhaling the lure. This is some super exciting action to watch!

What if the techniques don’t work?

After explaining the above techniques and how to entice following fish, there will always be plenty that will just not play the game. When the water is just warming up early in spring it can be difficult to get any fish to bite as they still aren’t fully active. When it comes to Golden Perch, if they aren’t hungry they won’t touch anything.

When spring is in full swing and the fish are biting everywhere you might catch plenty of fish for the day but chances are you may have has twice as many follows. This is because you can’t entice all of them and it’s usually because by the time you spot the fish it’s too late and they are already turning back for the depths.

One of the most important tips I can give you to help increase your chances of landing a following yella is to make sure you watch your lure and try to spot the fish as early as you can. The further down you spot the fish the more chances you will have of turning a follow into a hookup!