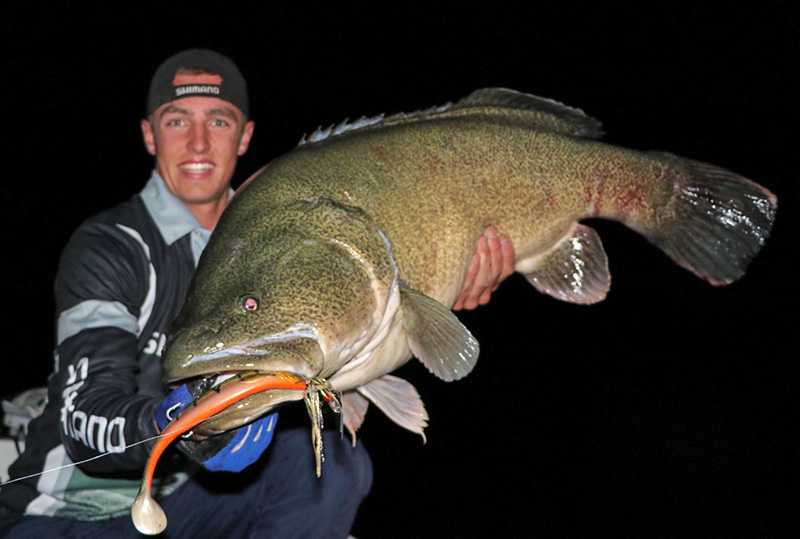 After many seasons of fishing the cold nights in winter, we now know its hard work! Blowering Dam in particular is a massive grind. At the end of the 2018 winter all Blowering anglers received the exciting news that cod season would be open throughout spring.

It appealed for myself as a new challenge and I couldn’t wait to see how the big cod behaved over the warming months. The fishing would be very different to both winter and summer, but I was hoping there would be an increase in activity.

And I was right! As the water temps picked up, so did the fishing. The cod begin to feed more with higher activity and more hits during a night session became more common.

Rhys and I spent a night on the lake in September where we missed 7 hits. It was becoming clear that due to the warmer water smaller fish were out and about. As we were casting large lures and these smaller fish just weren’t hooking up.

In winter the larger fish are active so using large lures up and over 200mm is best to tempt these fish into eating. During spring and summer all the smaller fish become active4 and if you are missing hits more often than hooking up when using big lures, try downsizing to something between 120-160mm in length. Smaller lures will be easier for smaller fish to attack and therefore result in more hook-ups.

Over the next 5 trips with a few mates the fishing was tough. Lots of hits and only a few small fish to show for it. The fishing has changed in Blowering from winter to spring as the fish behave different. The smaller fish become active and now unlike winter every fish isn’t going to be a Blowering monster.

After seeing many other big cod still being caught I knew it was only a matter of time before the father of all these smaller fish grabbed on.

Last weekend (late October) the weather was awesome and it was a very enjoyable night to be out on the water. We started the ‘Blowering grind’ along a likely looking bank. Keeping in mind that the water temp is now up around 20 degrees and the fish will be holding deeper.

During spring the fish are extremely active and it’s the time of the year where you’ll have the most success and action for a session. The rocky banks, steeper areas and bays with structure are the best areas to target as these hold the most fish, and with plenty of fish being active you’ll have a better chance of success.

After 3 hours without a hit we were well and truly in auto pilot. It had been so long since I had felt the pull of a Blowering giant. While working over a rocky point on one particular casts I was hammered by a good fish in shallow at the start of my retrieve. Finally I had found that patrolling big muzza and I was on. The hit sent me instantly shaking at the knees. I had missed this feeling!

The big head shakes had us calling metery and as it hit the surface a Blowering beast appeared. After so many fishless trips, I was so pumped. The big cod was ultra-fat and came in at a metre neat.

He took a 1oz Mumbler rigged with a 22cm Westin Shad Teez and a treble stinger hook. Mumblers have been the stand out lure this spring as they are easy to fish, sink quickly and you can feel the vibration as they work which the active cod love!

Fishing the lake in spring has by no means made the place easier but the fish are certainly more active. Expect more hits and smaller fish than you would during winter, but you still must be prepared to put in the big hours.

The first time targeting spring cod in Blowering has been an eye opener. I’m glad I could finish it this way but there is much more to learn next spring!

In winter our preference is to fish shallow as the large fish move into these areas to feed. As the temperature begins to warm you want to fish deeper. During a night session fish anywhere from 4-8m of water. We have found the most active fish will come from that 4-6m mark.

Tallis Cotterill Tallis is the youngest and newest member of the Social Fishing team. He grew up fishing and loves the challenge it brings. Tallis spends his time targeting all freshwater species in a number of different locations. Casting lures for Murrumbidgee cod and targeting monster cod in the dams are his favourite styles of fishing. Tallis enjoys sharing stories and articles to help other anglers learn more about freshwater fishing.
Related Posts