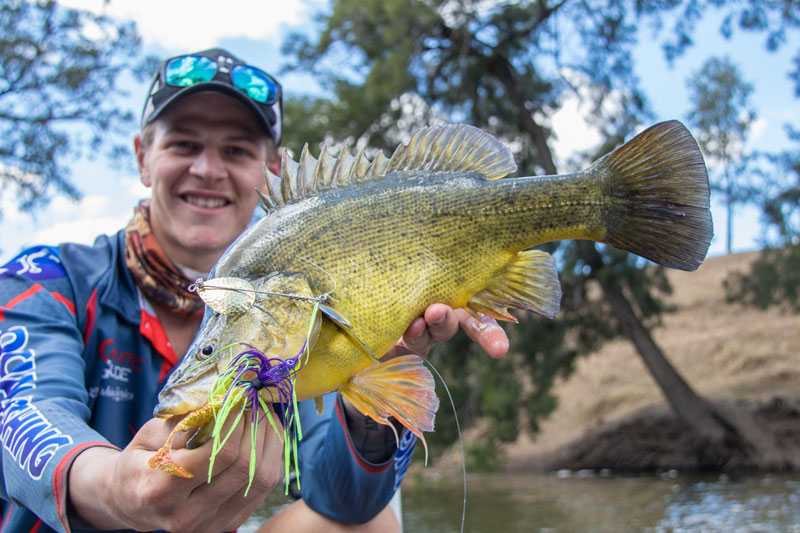 Spent the weekend chasing yellas on the Murrumbidgee River… and weren’t they on fire!

Spring is the best time to target them and we managed to find plenty of switched on fish. I was expecting tough fishing conditions as the water temperature dropped 8 degrees in the cold snap we had late last week. When this happens it makes native fishing extremely tough especially when matched with a low pressure system.

Luckily the sun came out on Saturday afternoon which brought the temperature up a little bit, before it continued to rise on Sunday morning, and they were feeding better than I expected.

Second to this we had a bit of rain and the water was a lot dirtier than normal and this is probably what made them more active than usual as they would feel more protected in the dirty water. Another thing we found is that they were actually feeding better in the sunny areas rather than the shade… this would be due to the cold water and in the sun it would be much warmer.

This is very different to what would normally happen at this time of year with late November heat the fish usually feed much better in the shaded areas. With only a few more days of hot weather their behaviours will most likely switch back.

We fished with smaller lures with 70mm AC Invader and 3/8oz Mini Guts Spinnerbaits being the stand out lures on the goldens. The area we fished is heavily populated with Golden Perch with very little Murray Cod and that’s the reason we decided to fish this area.

We found the fish sitting on almost every type of structure with willow tress holding a lot of the fish and they were taking both Hardbodies and spinnerbaits.

One thing we also noted that even though the water was dirty, we could still see so much under the water but only while wearing our Spotters. AT one stage I took mine off thinking it was getting too dark in the afternoon and Tallis spotted a small log beneath the surface, cast to it and caught a small golden, while I couldn’t see a thing. Can’t stress enough how important good sunglasses are!

Check out the photos below from the trip and now let’s gear up for cod opening! I think it’s going to be a great summer of fishing.

You can also purchase AC Invaders and Mud Guts Spinnerbaits on the Social Fishing Store.