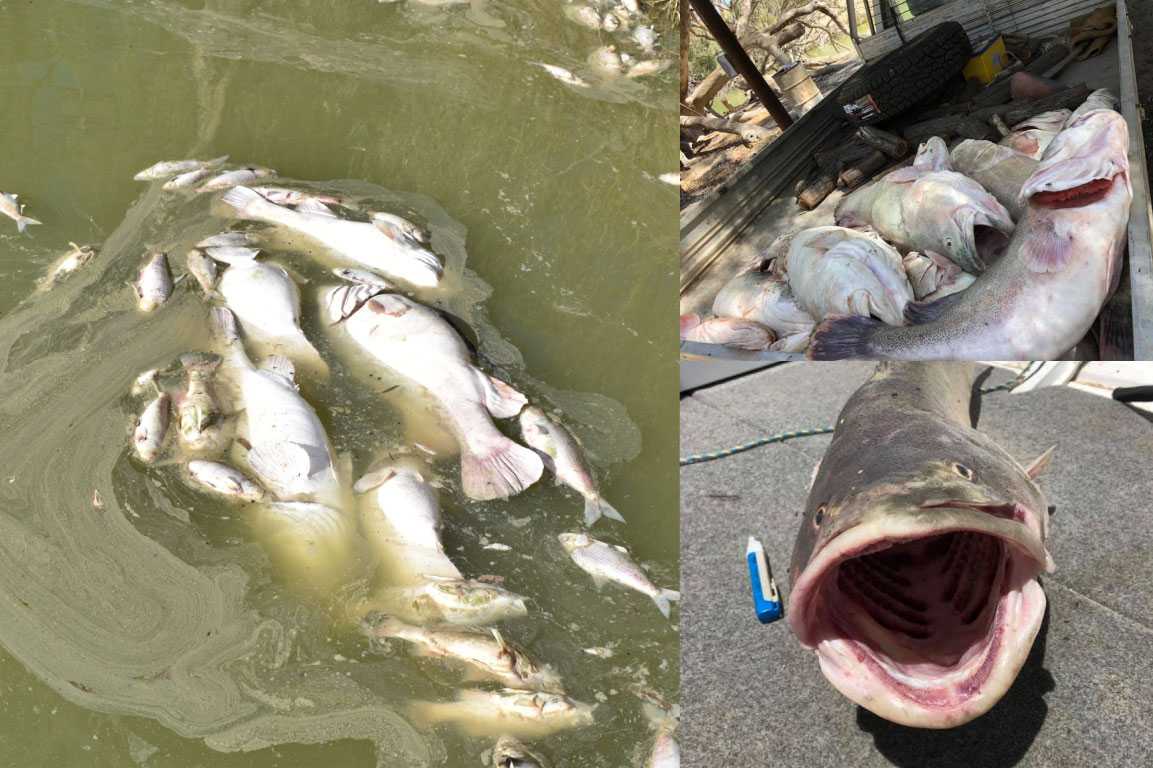 Again I’m sitting down to write about yet another fish kill… but unfortunately this one is very different and much worse!

We are currently witnessing the destruction of our environment, due to one of the largest injustices in water management in Australia, and this has been going on for years with very little water, if any, flowing down the Darling River.

The Darling River has seen two large scale fish kills with the first incident happening before Christmas 2018 which saw an estimated 10,000 died in a 40km stretch of river upstream of Menindee.

The second fish kill begun to surface in early January with masses, even hundreds of thousands of fish dying in a 10km stretch near Weir 32. The deaths aren’t localised to just our native species of Murray Cod, Golden Perch and Bony Bream, but also Carp, crustaceans and birdlife have perished in this disaster.

Dead fish are also washing up in Menindee Lakes which is almost empty, sitting at 2.5%. This is catastrophic for the fishery as the Menindee Lakes is a nursery and breeding grounds for our native species which help populate the Darling River. This whole system is almost wiped out… it will soon be all gone!

What Killed the Fish?

The direct cause of the mass fish kill has been related to poor oxygen levels in the water from the death of algae blooms. What is said to have happen is the algae has grown in the still water but due to cooler weather that passed through it caused the algae to perish, the decomposing algae then sucks all the oxygen from the water therefore causing the fish to die as a result.

But… the river shouldn’t have been allowed to cease flow and become pools above each weir!

Flow and velocity is what a river needs to survive. If there was a current flow, even a minimum base flow this would not have happened. This is the major issue at hand.

We have levels of management upon management in this country, and if these managers in high paying roles can tell us that the death of the algae blooms killed the fish, then they would know that if the water sat in pools this was guaranteed to happen!

As mentioned above the cause of these mass fish kills is due to poor management but as we all know there is another factor in this big picture which is absolutely appalling – the relationship between politics and cotton.

There are some cotton growers in Australia that are stealing the water and nothing is being done about it, even after the ABC’s Four Corners investigation. It’s obvious that this is the problem because the river is dry… it’s not flowing any more… where is the water going?

I totally support farming and agriculture in this country, we need this to be civilised and support the economy. This is the purpose of weirs, dams, locks and water management, so we can regulate the system to ensure we have water for farming.

The allocations for water extraction allowed by the government needs to be fixed. They are allowing for way too much water to be taken from the system.

Water extraction is fine, but as long as it doesn’t destroy the environment… which in this case it has. The system we have in place already affects the waterways and the fish but we are coming up with ways to support reproduction and survival of native species, for example through the introduction of fish ladders on weirs and locks.

But this has gone too far! To leave a river dry… with zero flow and just a selection of pools above each weir, it’s not good enough.

This is the overarching reason for the death of the Darling River.

Two years ago during the 2016 floods the Menindee Lakes were almost full. But Water NSW has allowed for water to be released downstream to meet flow demands and this covers up issue happening upstream of the lakes with zero water making it into Menindee Lakes. If there is no river above and the water is being released downstream… then eventually there is going to be a big problem, this is what is happening now.

Plus many might not have known that during the fish kill along the Murray in 2016 (which was a totally different type of fish kill) the Lower Darling River actually became a sanctuary for big cod in the Murray River.

These fish moved upstream into the Darling River as fresh water was being released from the Menindee Lakes. This won’t be an option to help the Murray River fish if it happens to flood again.

Well apparently no one… This is the part that is making Australian people extremely angry.

That not a single government body is stating the real truths about what has happened nor are they admitting fault.

It’s someone’s fault and it’s obvious that if those who manages the rivers, allow it to run dry then it’s their fault. So is it Water NSW, MDBA, our State and Federal Governments?

Whoever it is, we as Australians are extremely disappointed.

Even in statements made by fisheries, they are explaining that the deaths were caused by lack or water, the algae bloom and the ongoing drought. But come on… where is the mention that the water is not being managed correctly?

DPI senior fisheries manager, Anthony Townsend said, “The department would use the incident to learn more about our native fish and improve management.”

They are all dead! We know what the problem is and so do you! That statement means nothing!

Water NSW and the NSW DPI also blamed the drought. Again, it’s sad to see everyone who could do something about it just ignoring the real reason.

As people are saying, imagine if it was 10,000 whales or dolphins that washed up on our beaches!

The only thing we have seen the NSW Government plan to do is build a $500m pipeline to pump water from the Murray River to provide water for Broken Hill. This plan has seen high controversy and the local community is not happy. It is believed this will be another excuse and to keep the Menindee Lakes empty and will most likely see the Darling River run dry more often.

Not Just the Fish

The issue isn’t just about the fish and the river ecosystem but also the townships and communities that the river supports. Majority of the Darling River is dry so how are the people who live on its banks meant to survive?

Then there are those communities who are situated on the weir pools who use the water for showering and everyday use. The water is now a toxic sludge, so how are these communities meant to survive?

Not an Isolated Event

The sad thing is, this issue is spreading… it’s not isolated. We have been sent images from the Murrumbidgee River at Hay. The river is a putrid green colour, stagnant and stinks!

This is exactly what is happening up on the Darling River and along many other large western rivers like the Lachlan and the Namoi. It won’t be long before fish will start dying in these waterways as well.

How can management let so much water be taken from the river to leave a flow rate of 196ML/day reaching the rivers end? Our river out west are dying! And if its not management then someone is stealing all this water.

I’ve been speaking to local anglers in the Northern Basin and they say that the Namoi will be next. There is no flow in the river at all and the water is extremely hot and stagnant. It could only be a few weeks before we see another major fish kill.

How we can help?

OzFish Unlimited and OzFish Sunraysia are spending their time trying to help save the few fish that are left in the river system. They are working to raise funds to install temporary pumps in weir pools to push water and try to create oxygenated refuges to help keep the fish alive.

It’s great to see these groups stand up and try to at least save a few of the fish that are left. You can help by donating to the GoFundMe page here: SaveTheDarlingFish

So… The problem is bigger than we can fathom and it’s scary.

What will the future hold for our environment, inland communities and recreational fishing? Will there be any fish that survive in the lower Darling River?

0
15   0
previous Murray Cod in Rivers – 3 Best Spots to Cast your Lure!
next Achieve your Fishing DREAMS!